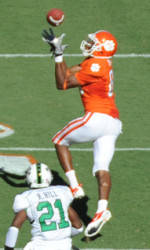 Clemson vs. Presbyterian Series Clemson holds a 32-3-4 advantage in the series with Presbyterian College that dates to the 1916 season. Clemson won that first meeting 40-0 at Riggs Field. The last meeting was held at Memorial Stadium on September 21, 1957. Clemson won that 1957 season opener by a 66-0 score behind two touchdown runs by Bill Mathis. Mathis went on to be Clemson’s first Super Bowl Champion with the New York Jets and Joe Namath. Harold Olson, who was inducted into the Clemson Hall of Fame last Saturday, started at right tackle for the Tigers in that game.

Clemson had 528 yards of total offense in that 1957 game, including 439 yards rushing. Presbyterian was held to 96 yards of total offense. Presbyterian lost five fumbles in the contest, while Clemson did not have a turnover. Clemson had 439 yards rushing divided among 13 ball carriers. No Clemson back had at least 100 yards, but nine backs had between 33 and 78 yards.

Clemson and Presbyterian played in the season opener 28 consecutive years between 1930-57. Clemson has won 14 in a row in the series with the last Presbyterian win coming in 1943, a 13-12 Blue Hose victory. Clemson had lost its entire junior and senior classes to the World War II effort that year and started all freshmen in the game.

The two teams have played the season opener 31 of the 39 previous meetings. Clemson has won by shutout in 24 of the previous 39 games and the Tigers have held Presbyterian to seven points or less 33 of the past 39 games.

Clemson has outscored Presbyterian by 1005 points in the 39 games, an average margin of victory of 25.76 points per game. The Tigers have scored at least 33 points in 13 of the last 14 games against the Blue Hose.

There have been four ties in the series. The 1931 tie must have been the biggest upset because Clemson had gone 24-8 the last 32 games prior to that 1931 season opener.

Clemson and Presbyterian met in the first game in the history of Memorial Stadium. That game was held on September 19, 1942 and the Tigers came away with a 32-13 victory.

Clemson Wins Season Opener Clemson won its season opener last Saturday by a 35-10 score over North Texas. It was an unusual game from a statistical standpoint.

Clemson fans wondered who would make the big plays for the Tigers now that C.J. Spiller and Jacoby Ford have moved on to the NFL. But, on the first offensive play, Andre Ellington showed that he was capable with a 60-yard run for a touchdown. Spiller scored 14 seconds into the 2009 season on a kickoff return against Middle Tennessee, and Ellington scored 16 seconds into the season against North Texas and his 60-yard run.

Later in the game, Brandon Clear took a 70-yard touchdown pass from Kyle Parker for a touchdown, his first career touchdown and fourth career reception, and Jamie Harper had a 49-yard run. Clemson had 423 yards of total offense in 46 plays for the 9.2 average.

Clemson’s defense had six sacks, and 13 total tackles for loss to go with two interceptions. The Tigers allowed 10 points, just the second time in the last 10 years Clemson had allowed 10 points or less in the opening game. Jarvis Jenkins got his senior year off to a good start with three tackles for loss, while Da’Quan Bowers had eight total tackles in the game, six in the first half.

Presbyterian Update Presbyterian comes to Clemson with a 0-1 record, a 53-13 loss at Wake Forest on September 2. So this will be the second straight ACC foe for the Blue Hose to open the season.

Presbyterian had some bright moments in the opener at Winston-Salem, including the ESPN SportsCenter Play of the Day.

On the first play after a kickoff, quarterback Brandon Miley took the snap from center and threw what appeared to be an errant pass to the left wing to receiver Derri Overholt. Overholt caught the ball on a bounce. After a slight pause that froze the Wake Forest defenders who thought it was a simple incomplete pass, Overholt threw the ball down field to Michael Ruff, who raced 68 yards for a touchdown.

Miley completed 18-34 passes for 165 yards and a touchdown to lead the Presbyterian passing attack. Jeremy Cole had the most catches with six for 76, while Ruff finished with 4-122. Presbyterian threw for 292 yards and had 362 yards of total offense in 76 plays. Trandon Dendy was the top rusher in the opener with 49 yards in 16 attempts.

Ceejay Harris led the Presbyterian defense with seven tackles, while Justin Bethel, Cedric Byrd and Derek Brown had six stops apiece. Two coaches with ties to Clemson run the Blue Hose defense. Defensive Coordinator Tom Evangelista was a graduate assistant at Clemson from 2004-06, and Andy Ford, a former Clemson player in the mid 1990s, is the secondary coach. Ford also served as a graduate assistant at Clemson.