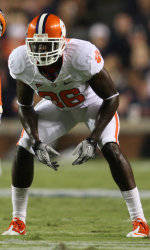 Clemson vs. North Carolina Series Clemson holds a 34-18-1 lead in the series with North Carolina that dates to 1897, the second year of Clemson football. The 1897 game was just the sixth game in Clemson football history and the Tar Heels won that game 28-0. It was the first game for the Tigers against a team that is now in the ACC

Clemson has won five of the last six meetings dating to the 1999 season, Tommy Bowden’s first year. This will be the first game for the Tigers against the Tar Heels since Dabo Swinney became head coach. This will be Clemson’s first game at North Carolina since 2002, the year before Swinney came to Clemson as an assistant. So, this is the only ACC Stadium, Swinney has never coached a game as an assistant or head coach.

Clemson has scored at least 31 points in each of the five wins against North Carolina, since 1999, but just three points in the loss. Clemson scored 31 points in a 31-20 win at Death Valley in 1999 against a Tar Heel team coached by Carl Torbush. The Tigers won the 2000 game 38-24 behind four touchdown passes by backup quarterback Willie Simmons, who was on for an injured Woody Dantzler. It is the only game in Clemson history that a non-starter has thrown four touchdown passes.

Clemson was ranked 13th in the nation entering the 2001 meeting with the Tar Heels and Woody Dantzler was coming off the best back-to-back performances in Clemson history by a Tiger signal caller. He had 418 yards total offense in an overtime win against Georgia Tech and 517 in a win at NC State. Over 84,000 Clemson fans attended that Homecoming game in 2001, but Julius Peppers and the North Carolina defense had a plan to stop Dantzler and held him to a season low 127 total yards rushing and passing in a 38-3 North Carolina win. That Tar Heel team went on to defeat Auburn in the Peach Bowl.

Freshman Charlie Whitehurst threw four touchdown passes in just his second start in a 42-12 Clemson win at North Carolina in 2002. Tye Hill had the only 100-yard rushing day of his career in that victory. The next year Hill moved to defense and became a first round draft choice.

The Tigers won the 2003 meeting at Clemson by a 36-28 score, then Clemson won the last meeting in 2006 at Clemson, 52-7. Clemson celebrated the 25-year anniversary of its National Championship at that game and the Tigers looked like champions that day, gaining 504 yards of total offense and 30 first downs.

Clemson has won 18 of the last 24 meetings in the series. The Tigers have a 17-7 lead in games played at Clemson and Death Valley, and a 15-10-1 advantage in games in Chapel Hill, including a 14-9-1 lead in games at Keenan Stadium.

The landmark game of the series took place at North Carolina in 1981. The Tigers won that contest 10-8 behind an outstanding defense led by Jeff Davis and Jeff Bryant. It was the first meeting of top 10 ACC teams in the history of the conference, as Clemson was undefeated and ranked second in the nation entering the contest, while the Tar Heels were 7-1 and ranked eighth.. Jeff Bryant recovered a North Carolina lateral with a minute left to clinch the victory for the Tigers, a key win in Clemson’s National Championship season.

It was the Tigers’ largest margin of victory in the 53-game series that dates to 1897, and also came on the day when Clemson honored its 1981 National Championship team on the 25th anniversary of the undefeated season.

The #19 Tigers scored touchdowns on their first three possessions and never looked back. Clemson built a 35-0 halftime lead and 52-0 lead at the end of three quarters before the Tar Heels finally got on the board in the fourth quarter.

Clemson rushed for 324 yards despite not having a 100-yard rusher. The Tigers also passed for 180 yards, giving the team 504 yards of total offense on 79 plays, and had 30 first downs. Clemson did not punt in the game, scored all seven of its touchdowns after having first-and-goal, and had the ball for 38:17 to the Tar Heels’ 21:43.

The Tar Heels totaled just 45 plays on offense, and had 150 yards along with only eight first downs. The Tiger defense also limited North Carolina to just 7-23 passing, 1-10 on third downs, and no offensive plays longer than 19 yards.

North Carolina was hindered by poor field position the entire contest, as it did not start any of its 11 offensive drives outside its own 23. The Tar Heels’ average starting field position was their own 19, while Clemson’s was its own 43.

Will Proctor was 9-14 passing for 134 yards, including two strikes to Thomas Hunter. The tight end had catches of 47 yards and 24 yards. Chancellor had a team-tying-high three catches for 30 yards.

Davis got the Tigers going early on their first drive by carrying six times for 49 yards, capped by a one-yard touchdown run, to give Clemson a 7-0 lead just over seven minutes into the game.

After a three-and-out by the Tar Heels, the Tigers took over possession near midfield. Proctor’s 28-yard pass to Rendrick Taylor set up Chansi Stuckey’s 19-yard run on a reverse to the seven. Spiller rushed for a touchdown on the next play to give Clemson a 14-point lead. It was his first career touchdown on the ground.

Sadat Chambers stripped Brandon Tate on the ensuing kickoff, and Crezdon Butler recovered the fumble at the Tar Heel nine. After three plays moved the ball to the one, Davis scored on fourth down late in the first quarter.

Two drives later, it was Spiller’s turn to tote the football. He carried six times for 37 yards on the drive, and Merriweather later scored on a one-yard plunge to give Clemson a 28-0 lead.

Another three-and-out forced North Carolina to punt, and Clemson took over at its own 28. On second down, Proctor found Hunter wide open over the middle, and the senior scampered 47 yards to the Tar Heel 24. Davis then rushed for 14 yards to the 10, and scored on the next play with 1:40 remaining in the second quarter.

The Tigers opened the second half with more points, as they marched 82 yards in seven plays. Merriweather moved the ball near midfield with runs of 17 and eight yards. After an illegal participation penalty on the Tar Heels, Proctor connected with Hunter for 24 yards to the eight. Two plays later, Davis scored on a two-yard run.

Chris Clemons’ first career interception on the ensuing drive gave the ball back to the Tigers at the North Carolina 25. Five plays later, Spiller scored on a one-yard run with 7:14 remaining in the third quarter.

On Clemson’s next drive, Cullen Harper was inserted at quarterback, and he led the Tigers on a scoring drive. Harper carried on back-to-back plays for 22 combined yards to move the ball into Tar Heel territory. After the drive stalled, Dean made a 42-yard field goal to give the Tigers a 52-0 lead.

North Carolina finally put points on the board with a 12-play, 80-yard drive that culminated in a four-yard touchdown run by quarterback Cam Sexton. After going 0-for-9 on third down, the Tar Heels finally converted a third down to set up his score.

Harper then led Clemson on one of the longest drives (in terms of time) in school history. After a touchback on the kickoff, the Tigers went 62 yards on 16 plays, taking 9:45 off the clock. However, Chancellor was stopped on a fourth-and-one with 45 seconds remaining in the game.

Tickets are now available at a discounted rate for the Clemson vs. Maryland game on October 16. Adult tickets are $24 each and youth tickets (18 and under) are $10 each.