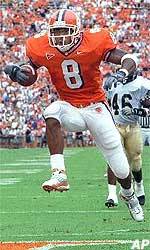 Lineup News: Kevin Johnson’s replacement in the starting lineup at cornerback will be Toure Francis, an original walk-on now on scholarship. It will be his first start. If Nick Eason can’t go, first-year freshman Eric Coleman, who has played just two snaps all year, will start at defensive tackle.

Other Notes: Each of the last four games of this series have been decided by seven points or less. Each team has won two of those games. Clemson quarterback Woodrow Dantzler needs just 57 yards rushing to become the first quarterback in ACC history to reach 4000 yards passing and 2000 yards rushing in a career. He averages 63 yards a game on the ground over his career. He needs 429 yards of total offense to become Clemson’s career leader in that category.Travis Zachery needs just 30 yards rushing to move into third place in Clemson history ahead of Terry Allen.