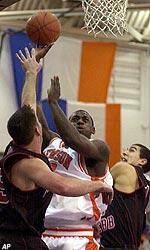 * Edward Scott went over the 1000-point mark in his 100th game when he had 14 points against Wake Forest on Jan. 28. He now has 1001 points, 533 career assists and 379 rebounds. He needs just 21 rebounds to become the eighth player in ACC history to reach 1000 points, 500 assists and 400 rebounds in a career. Steve Blake of Maryland is also in range of that accomplishment.

* Four Clemson players had injury issues after the Wake Forest game. Olu Babalola suffered a bruised knee in the first half against the Demon Deacons. He played just five minutes after suffering the injury. But, his knee was fine in the second half, he played only sparingly because of a stomach flu problem. Julian Betko suffered a sprained ankle at the shoot-around prior to the game, but did play 14 minutes. He has been limited in practice, but should play Sunday. Chris Hobbs suffered a bruised jaw in a late-game collision at midcourt. He should be back for the NC State game. Edward Scott continues to fight a virus that has limited his effectiveness the last four games, but he should play at NC State.

* Clemson is on a three-game losing streak after winning 11 of its first 13 games to open the season. Clemson is a perfect 10-0 in non-conference games. The Tigers have not won since defeating Virgnia, 78-77 on January 18. The losing streak started at Florida State on January 21 when Anthony Richardson made two free throws with 0.4 seconds left for a 60-59 victory. Clemson has two other losses by five points or less.

* Larry Shyatt and Herb Sendek both coached on the same staff at Providence under Rick Barnes in 1988- 89. Shyatt and Sendek have split eight previous head-to-head head coaching meetings since. This will be Sendek’s 300th game as a Division I head coach. Sendek is 6-6 vs. Clemson.