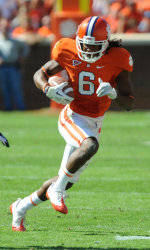 Clemson vs. NC State Series Notes  Overall, Clemson has a 51-27-1 lead in the series against NC State, including an 18-15 lead in Raleigh and a 13-8 lead in games played at Carter Finley Stadium. Clemson has a 22-11 lead in games at Clemson and a 19-11 lead in games in Death Valley.  The series dates to 1899 when Clemson was victorious 24-0 in a game played in Rock Hill, SC. That was just the fourth year of Clemson football and the 16th game in the school’s history.  Nine of the last 14 games have been decided by eight points or less, including last year when Clemson won 14-13 in Death Valley.  Clemson has won seven straight games in the series, the longest winning streak by the Tigers in the history of the series. NC State’s longest winning streak in the series is six (1971-76).  Clemson’s current seven-game winning streak over NC State is its longest active winning streak over any league foe, and the longest by the Tigers against an ACC opponent since they won eight in a row over Maryland from 1993-2000.  The 2004 game at Clemson was decided on the last play of the game when Charles Bennett made an interception at the goal line. The 2006 game was a 20-14 Clemson win. NC State drove to the Clemson 30-yard-line before freshman Ricky Sapp recorded a sack on the last play.  NC State was Clemson’s nemesis team from 1986-88. The Tigers won the ACC Championship each year under Danny Ford, but never beat the Pack in the process, losing all three seasons. It was the only loss for Clemson in the ACC in each of those years.  The 2008 Clemson victory over NC State proved to be Tommy Bowden’s last win over an ACC team in his Clemson career.  The two schools meet in what has been called the Textile Bowl since 1981. There is a trophy presented after the game to the winning team in its locker room. Clemson has a 21-9 lead in the series in Textile Bowl games.  Clemson has 51 wins in the series, the third most victories for the Tigers over a school. Clemson has beaten South Carolina the most with 65 wins (65-39-4), followed by Wake Forest (59-17-1). NC State is next at 51-27-1. Furman is the only other team Clemson has beaten more than 40 times. The Tigers are 41-10-4 against the Paladins lifetime.

Last Year vs. NC StateClemson 14, NC State 13 Clemson overcame a 10-0 deficit in the second half to rally for a 14-13 win over #23 N.C. State at Memorial Stadium on November 6. Clemson won its seventh game in a row in the Textile Bowl matchup.

N.C. State took its first possession 58 yards and scored when Russell Wilson hit Mustafa Greene for a three-yard touchdown pass. The Tigers responded with a 15-play, 65-yard drive that lasted 6:54, but the drive stalled and Clemson missed a 37-yard field-goal attempt.

The Tigers, who had 190 total yards in the first half, had drives of 10 and 14 plays later in the first half, but neither resulted in points. However, the defense kept Clemson in the game, as Jarvis Jenkins blocked a field goal and DeAndre McDaniel, who was named ACC Defensive Back-of-the-Week, intercepted a pass in the endzone.

After the Tigers turned the ball over for the third time, this time at their own 13, Clemson’s defense held again and forced a 28-yard field goal early in the third quarter that upped N.C. State’s lead to 10-0.

Greene later fumbled and Kyle Parker connected with DeAndre Hopkins for a 12-yard touchdown pass over the middle on third-and-goal.

After another Wolfpack field goal in the fourth quarter, Jamie Harper scored on a four-yard touchdown run with 6:18 left in the game to give Clemson a 14-13 lead. The Tiger defense held on N.C. State’s last two possessions, giving Clemson its first one-point win since 2005. With three minutes left in the game, Dawson Zimmerman also was clutch when he made a one-handed grab of an errant punt snap and pinned N.C. State at its own 15 on his hurried 38-yard punt.

Parker was 20-29 passing for 214 yards and a score, while Harper had 60 rushing yards and 34 receiving yards to lead Clemson’s offense.