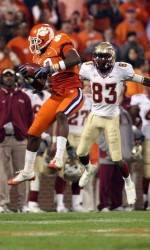  Spiller needs just 90 all-purpose running yards to establish a Clemson single season record. He has 1794 so far this year and the existing record is 1883 by Derrick Hamilton in 2002.

 Spiller needs 298 all-purpose yards to become the fifth player in NCAA history to reach 7000 for a career.

 DeAndre McDaniel needs one interception to establish the Clemson season record for interceptions. He has eight and is the co-holder of the record at the moment.

 Rashard Hall needs one interception against NC State to establish the Clemson record for consecutive games with an interception. He has had at least one pick in four straight games.

 Jacoby Ford has now caught at least one pass in 23 consecutive games he has played.

 Saturday will be Thomas Austin’s 33rd consecutive start in the offensive line.

 The series dates to 1899 when Clemson was victorious 24-0 in a game played in Rock Hill, SC. That was just the fourth year of Clemson football and the 16th game in the school’s history.

 Eight of the last 12 games have been decided by eight points or less, but Clemson won by 18 points last year at Clemson (27-9). The 2004 game at Clemson was decided on the last play of the game when Charles Bennett made an interception at the goal line. The 2006 game was a 20-14 Clemson win. NC State drove to the Clemson 30-yard-line before freshman Ricky Sapp recorded a sack on the last play. Clemson won the 2007 game by a 42-20 margin.

 NC State was Clemson’s nemesis team from 1986-88. The Tigers won the ACC Championship each year under Danny Ford, but never beat the Pack in the process, losing all three seasons. It was the only loss for Clemson in the ACC in each of those years.

 Tommy Bowden was 7-3 against NC State in his career leading the Tigers program. That includes a 3-2 record in Raleigh and a 4-1 ledger at Clemson.

 Clemson has won five straight games in the series, tied for the longest streak by the Tigers in history. In addition to Clemson’s active five-game streak, Clemson also won five in a row from 1981-85. NC State’s longest winning streak in the series is six (1971-76).

 Last year’s victory over NC State proved to be Tommy Bowden last win over an ACC team in his Clemson career.

 The two schools meet in what has been called the Textile Bowl since 1981. There is a trophy presented after the game to the winning team in its locker room. Clemson has a 19-9 lead in the series in Textile Bowl games.

 Clemson is looking for its 50th all-time victory over NC State. The 49 wins Clemson has in the bank rank third among all Tiger opponents. Clemson has beaten South Carolina the most with 65 wins (65-37-4), followed by Wake Forest (57-17-1). NC State is next at 49-27-1. Furman is the only other team Clemson has beaten more than 40 times. The Tigers are 41-10-4 against the Paladins lifetime.