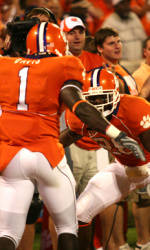  The series dates to 1899 when Clemson was victorious 24-0 in a game played in Rock Hill, SC. That was just the fourth year of Clemson football and the 16th game in the school’s history.

 Eight of the last 11 games have been decided by eight points or less. The 2004 game at Clemson was decided on the last play of the game when Charles Bennett made an interception at the goal line. The 2006 game was a 20-14 Clemson win and NC State drove to the Clemson 30-yard-line before freshman Ricky Sapp recorded a sack on the last play. Clemson won last year’s game by a 42-20 margin.

 NC State was Clemson’s nemesis team from 1986-88. The Tigers won the ACC Championship each year under Danny Ford, but never beat the Pack in the process, losing all three seasons. It was the only loss for Clemson in the ACC in each of those years.

Landmark Games in Clemson vs. NC State Series  1903 – Clemson defeated NC State 24-0 in Columbia, SC in 1903. Clemson Head Coach John Heisman married the former Evelyn Barksdale in Columbia after the game. It is believed to be the only time in Clemson sports history that a coach has won a game and won a lady’s hand in matrimony on the same day.

 1948 – Bobby Gage ran 90 yards on a punt return for the only score of the game in a 6-0 Tiger victory over the Wolfpack in 1948. It was the longest punt return in Death Valley until Jacoby Ford had a 92-yard punt return against Florida Atlantic in the opening game in 2006.

 1950 – Clemson defeated NC State 27-0 in 1950. Wyndie Windham led the Clemson defense and according to legend knocked out three NC State backs on three consecutive plays in the second half.

 1967 — Clemson painted its shoes orange for the NC State game in Death Valley and the Tigers upset the 10th ranked Wolfpack 14-6. One of the linebackers on that NC State team was former Pack Head Coach Chuck Amato. Clemson clinched a tie for the ACC championship with the victory. Clemson painted its shoes orange because NC State had featured a defense that had worn White shoes during the season. It was the highest ranked team Clemson defeated in Death Valley in the Frank Howard era.

 1984 – Clemson defeated NC State 35-34 in Raleigh in the highest scoring game decided by one point in Clemson history. No points were scored by either team in the fourth quarter.

 1991 — Clemson wore purple jerseys for the first time since the 1940s in a 29-19 upset victory over NC State. NC State was undefeated and ranked 10th in the nation entering the game against Ken Hatfield’s Tigers. Nelson Welch kicked a record five field goals in leading Clemson to the victory. Clemson went on to win the ACC Championship.