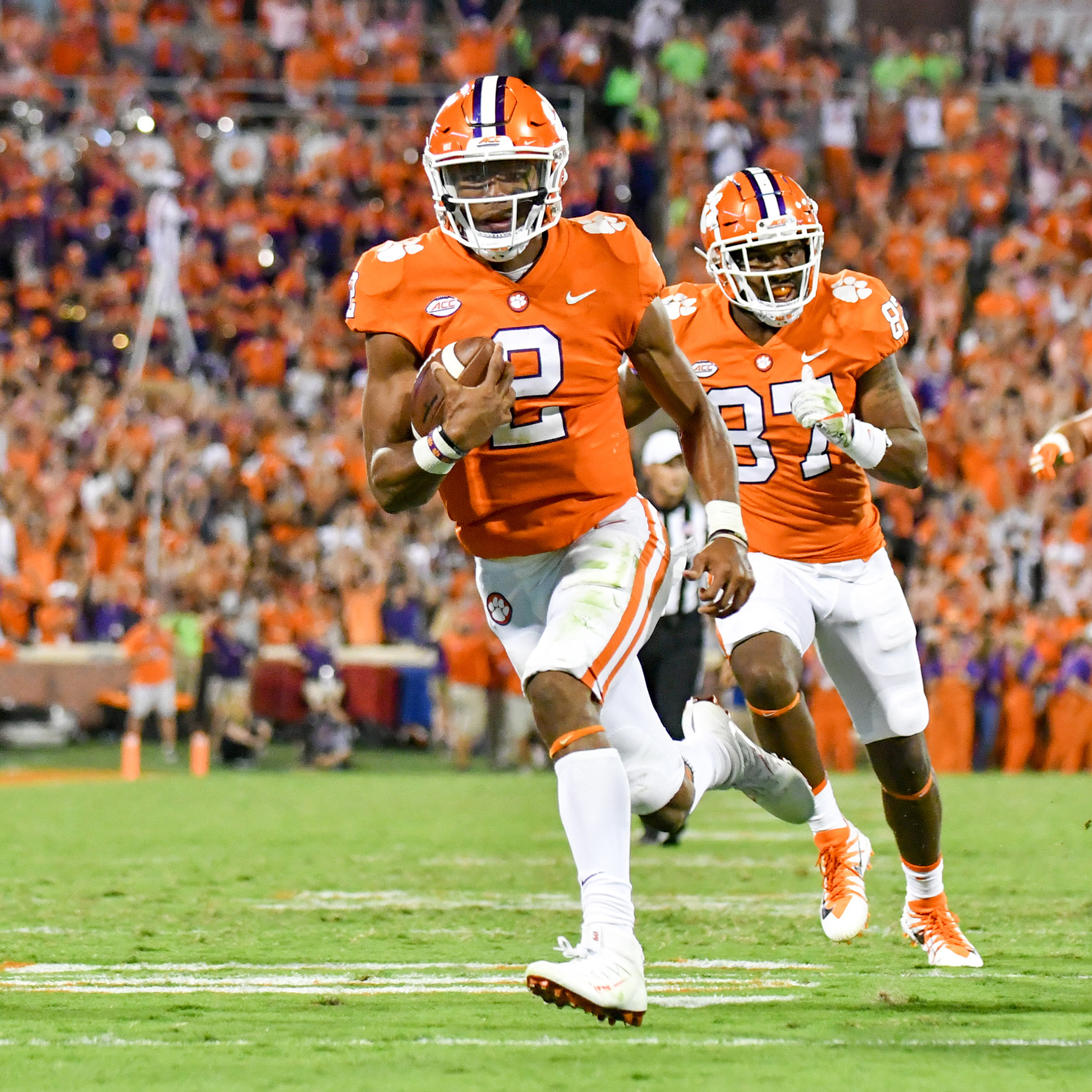 When football teams of two universities play each other but 10 times in 72 years, can their competing Saturday in Charlotte for the Atlantic Coast Conference championship be called a “rivalry?”  If it’s #1 ranked Clemson, holder of two national titles, versus #6 ranked Miami, holder of five, it certainly can.

It didn’t begin as such in 1945 when both Clemson and Miami were having trouble with their schedules.  They were considered “spoilers” by most of the so-called better college football programs: chances of losing to a nonentity team were too great.

So the two met in Miami on November 2, two months after the official surrender of the Japanese to end World War II.  Neither team was nationally ranked at the time, nor at the end of the season, though Miami’s 7-6 win helped the Hurricanes finish with a 9-1-1 mark and its second appearance in the Orange Bowl, a 13-0 victory over Holy Cross.

Fast forward to 1950 when both Clemson and Miami shared spots in the Associated Press “top 20” for the first time.  At season’s end the Tigers were #10, the Hurricanes #15.  Each had 8-0-1 records, but were considered like Central Florida and Memphis today: not really “big time” teams.  Their selection to meet in the Jan.1, 1951, Orange Bowl was not all that well received in Miami.

Even so, Clemson and its “dream backfield,” which set offensive records that lasted into the 21st century, couldn’t have approached a game with more enthusiasm. Most of the sports editors of major newspapers in the Carolinas were invited to join the Tigers at their Miami Beach Flamingo Hotel headquarters a few days before the game—all expenses paid.  Needless to say, the Tigers’s 15-14 thrilling triumph was well-covered by the press.

Clemson won the game late as Sterling Smith tackled Miami running back Frank Smith in the endzone for a safety with two minutes left to turn a 14-13 deficit into a 15-14 victory. Clemson has scored exactly 15 points in a victory just once since that game (15-12 over Florida State in 1976).

A year later Clemson and Miami would meet again at season’s end—this time in the Gator Bowl. The Tigers, with a 7-2 record were ranked #19 by the AP; the Hurricanes at 7-3 were unranked. Miami won 14-0, thanks in large part to four pass interceptions by the Hurricanes’ Jim Dooley and a blocked Tigers punt that

On a positive note, the back-to-back bowl games between Miami and Clemson helped bring about a regular season two-game series between the two teams in Miami in 1953 and 1956.  Also, Clemson’s defiance of the Southern Conference ban on bowl games in 1951, along with Maryland, winner over Tennessee in the 1952 Sugar Bowl, helped bring about the creation of the Atlantic Coast Conference in 1953.

As for games four and five in the Clemson-Miami “rivalry,” neither team had a winning record in 1953 though in their Oct. 9 Friday night game.     The Hurricanes proved to be just that in scoring six second-half touchdowns in 21 minutes  after a scoreless first half to whip the Tigers, 39-7.

In 1956, Clemson was #13 and Miami #8 when they met on Friday night, Nov. 16.  The home team, with Vice President Richard Nixon in the stands. At one point in the game, Miami scored and they set off a cannon, bringing fright to all the secret service men around Nixon, who was sitting in the stands.

Miami won 21-0 and finished the year bowless, but with a #6 AP rank. Those were certainly different times. Imagine being No. 6 and not going to a bowl game today. Clemson was 7-1-2, #19 in the final AP poll and loser to Colorado in the 1957 Orange Bowl.

It was much the same with Miami.  They seldom showed up in the national polls between 1957 and 1979 except for a #9 finish in 1966 and a #16 rank in 1967.  Enter Howard Schnellenberger in 1979 with the prophesy that he would coach Miami to a national championship in five years.  This he did in 1983, two years after Ford had guided Clemson to its first title.

Clemson traveled to the Orange Bowl in 2004, Miami’s first year in the ACC and Tiger fans relived the 1981 National Championship in the same stadium.  On Nov. 6 unranked Clemson visited #11 Miami, and overcame a Hurricane 17-3 lead to win 24-17 in overtime.  Reggie Merriweather, now the sideline reporter on the Clemson radio network, scored the winning touchdown.

The following year at Clemson, #13 Miami evened its ACC Tiger record with a 36-30 three overtime win at #20 Clemson. It is still the longest game in Clemson history in terms of overtimes.

Enter Dabo Swinney in 2009, his first full year as Clemson’s coach.  His Tigers were 3-3 on Oct. 24 when they visited #8 Miami. The Tigers featured a not-so-secret weapon, running back C.J. Spiller who returned for a fourth year to play for Swinney,

Clemson upset the Hurricanes 40-37 behind Spiller’s school record 310 all-purpose yards, including a 90-yard kickoff return and 56-yard pass reception for touchdowns. The win actually came in overtime, on a pass from Kyle Parker to Jacoby Ford. It marked the third consecutive overtime meeting between the two teams, with Clemson holding a 2-1 advantage in those meetings.

Swinney’s key coaching staff changes in 2011 (Chad Morris as offensive coordinator) and 2012 (Brent Venables as defensive coordinator) have helped launch a kind of Tiger football consistency not unlike that of Miami’s 20 great years (1983-2003). In the past seven seasons (2011-17), Clemson has finished in the “top 10” five times, including regular season #1 ratings in 2015 and 2017 and a national title in 2016.

During this same seven-year period, Miami has fallen out of the final AP rankings until this year. In the sole meeting of the two teams in the last seven years (Oct . 24, 2015, in Miami) the Hurricanes were defeated by a sixth ranked Clemson team, 58-0. Then third string quarterback Kelly Bryant scored the first two touchdowns of his career, including a 59-yard run.

Miami’s hiring of veteran Georgia coach and former Hurricane player Mark Richt in 2016 brings us up to date.  A solid 9-4 record last year didn’t result in a national ranking at season’s end, but this year the Hurricanes are #7 in the College Football Playoff Poll with a 10-1 record.

Clemson and Miami were not scheduled too meet in 2017; however, Saturday they compete for the ACC championship and a chance to play

for another national title—Miami for its sixth and Clemson for its third.

Yes, this is a rivalry.