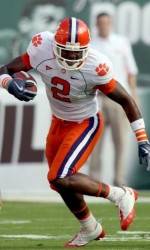 Clemson vs. Miami (FL) Series  This will be the ninth meeting between Clemson and Miami (FL) on the gridiron. Miami (FL) has a 5-3 edge in the series that dates to 1945. This will be just the ninth meeting, but the sixth time Clemson has faced a top 25 Miami team. Both teams have been ranked in the top 25 entering the game three times, including the last meeting at Clemson in 2005 when 13th ranked Miami (FL) defeated 20th ranked Clemson, 36-30 in triple overtime. That is the longest game in Clemson history in terms of overtime periods.

 The last three meetings between the two teams have been decided in overtime. All three times the road team gained victory. Clemson won at Miami in one overtime in 2004 and Miami won at Clemson in three overtimes in 2005. Then Clemson won in overtime last year in Miami. The two teams did not play between 2006-08. This will be the last meeting until 2014.

 Clemson’s first victory in the series took place in the Orange Bowl game at the end of the 1950 season. Frank Howard and the Tigers won that game, 15-14, when Clemson middle guard Sterling Smith tackled Miami running back Frank Smith in the end zone for a safety with under two minutes left. It is one of just two times Miami (FL) has lost an Orange Bowl game since 1950. The only other time Miami (FL) has lost an Orange Bowl postseason game since 1950 was in 1995 (end of the 1994 season) when Nebraska defeated the Hurricanes, 24-17.

 The two teams also met in the 1951 Gator Bowl and the Hurricanes came away with a 14-0 victory. That was also a battle of top 20 teams. Jim Dooley had four interceptions to lead the Miami (FL) defense, an NCAA record for interceptions in a bowl game.

 The first five games of the series were played between 1945-56 and Frank Howard was Clemson’s coach in all five meetings.

 Clemson’s greatest victory in its history took place in Miami, FL. The Tigers didn’t beat Miami to record the victory, however. Clemson won the 1981 National Championship with a 22-15 victory over Nebraska in the 1982 Orange Bowl, then Miami’s home facility.

Last year Clemson defeated Miami (FL) in one of the most exciting games in Clemson history. Clemson’s 40-37 overtime victory included nine lead changes, the most ever in a Clemson football game. No team had consecutive scores in the contest.

The game included a record setting all-purpose running performance by Clemson’s C.J. Spiller, who had 310 yards in the game. His 90-yard kickoff return for a score just before the half gave Clemson some momentum going into halftime. He finished the day with 104 yards receiving, 81 rushing and 125 on kickoff returns. The only all-purpose figure better in Clemson history is his 312 yards against Florida State later in the 2009 season.

Kyle Parker completed 25-37 passes for a career high 326 yards and three touchdowns. Tight end Michael Palmer had a strong day with 5-74 and a touchdown before he suffered a concussion that forced him to miss much of the second half. DeAndre McDaniel had seven tackles and two interceptions, one of which he took back 23 yards for a score.

Clemson tied the game in regulation at 34-34 on a 30-yard field goal by Richard Jackson with five seconds left. Clemson then held Miami to a field goal in the overtime before Parker connected with Jacoby Ford on a 26-yard scoring pass to win the game in walk-off fashion.

Miami was ranked eighth in the nation entering the game and it tied for the highest ranked team Clemson has defeated on the road. It was Clemson’s first overtime win since the 2004 overtime win at Miami.