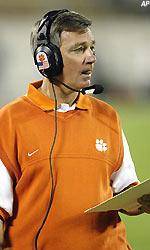 Clemson Looks for 200th ACC Win Clemson will strive to become the first ACC school to win 200 conference games when the Tigers meet Maryland in College Park on October 4. Clemson was a charter member of the ACC in 1953 and is now in its 51st season in the conference.

Clemson has a record of 199-107-6 in conference play for its 51 seasons, including its recent 39-3 win at Georgia Tech. That is a winning percentage of .647. Clemson ranks first among league teams in conference victories. North Carolina is second with 177, while Maryland, Clemson’s opponent on Saturday is third with 175. NC State holds the fourth position with 171. Clemson has a winning record against every other ACC team since the league began with the exception of Florida State.

Clemson also leads the ACC in conference championships with 13. Florida State is second with 10, followed by Maryland with nine (this includes co-championships). NC State and Duke are tied for fourth with seven wins apiece. Every current league member has won the league title at least once. Of course Miami (FL) and Virginia Tech will join the ACC next season.

September Was Good Month For Tigers Clemson finished the month of September with a 3-0 record, continuing a recent trend under head coach Tommy Bowden. It was the third time in the last four years that Clemson has been undefeated in September. All three of the victories were by at least double digits. The Tigers are 15-3 under Bowden in the month of September, including a 14-1 record in the month in the decade of the 2000s. Clemson’s only loss in September since the turn of this century was a 26-24 loss to Virginia on the last play of the game in 2001. The only other September losses under Bowden were to Marshall and Virginia Tech in 1999.

Clemson is 9-7 under Bowden in the month of October, including just a 1-3 record last year in the month.

Clemson vs. Maryland Series Clemson holds a 27-22-2 advantage in the series with Maryland. The first game of the series was played in 1952, one year before both teams became charter members of the ACC. Maryland won each of the first four games in the series.

Maryland has won each of the last two games, one in College Park and one at Clemson, but the Tigers have won eight of the last 10 games against the Terrapins. Clemson had won eight in a row and 13 of 14 prior to Ralph Friedgen’s return to his alma mater. Clemson held Maryland to just 12 total points in winning every game between 1993-98. Clemson recorded four shutouts, including three in a row during that time period. During Clemson’s eight-game winning streak from 1993-2000, Clemson held Maryland to an average of 7.0 points per game, while scoring 26.8 points per game themselves. Last year when Maryland defeated Clemson in Death Valley it was the first win for the Terps at Clemson since 1985. Clemson has a 15-11 lead in the series in games played at Clemson and 11-10-1 in games played in College Park. Perhaps the most significant win in the series for Clemson was in 1978 when Charley Pell led the Tigers to a 28-24 victory at Maryland, who was 9-1 at the time. Steve Fuller completed an 87-yard scoring pass to Jerry Butler in that game, still the second longest in Clemson history.

Tommy Bowden has a 2-2 record against Maryland during his tenure at Clemson. He led Clemson to a 42-30 victory at College Park in his first year thanks to 435 yards of total offense by Woody Dantzler. In 2000 Clemson came away with a 35-14 victory at Homecoming thanks to 231 all-purpose running yards by Rod Gardner and three interceptions by Alex Ardley.

Tigers and Terps Traditional ACC Rivals Saturday’s game will be a meeting of two of the traditional powerhouses of the ACC. Both Clemson and Maryland have been in the ACC since its inception in the fall of 1953. Both teams played their first ACC game against each other on October 3, 1953 at Clemson, a 20-0 Maryland victory. This coming Friday will be the 50-year anniversary of that first conference game for the two schools.

Clemson and Maryland have both won the National Championship, the Terps during that first ACC season in 1953, and Clemson in 1981. Clemson has the most ACC championships with 13, while Maryland is third with nine. Both schools have had the ACC Coach of the Year seven times each. Maryland has had 180 players drafted over the years, while Clemson has had 179.

The two teams played at the end of the season in most seasons between 1978-88 and the game usually decided the ACC championship. That was certainly the case in 1978 when the Tigers won 28-24 at College Park, clinching an undefeated season in the league over Maryland. It was 11th ranked Maryland’s only league loss that season. Clemson also clinched the ACC championship with a November victory or tie over Maryland in 1981, 1982, 1986, 1987 and 1988. Maryland clinched the ACC Championship in 2001 with a 37-20 victory over Clemson in College Park. The Terps also clinched the title in 1985 with a victory in Death Valley.

Bowden Won 50th Game at Georgia Tech Clemson head coach Tommy Bowden won his 50th career game when the Tigers defeated Georgia Tech in Atlanta on September 20. He enters the Maryland game with a 50-25 overall record, a .667 winning percentage. Given a minimum of five years as a head coach, Bowden is currently ninth among winningest active coaches in Division I. He entered the season 10th on the list, but has moved ahead of John Robinson of UNLV with the 3-1 start.

Now in his 26th year in college coaching, he has been to 12 bowl games, been a part of 10 top 25 seasons, five of which have been top 10 teams. Teams he has coached have been to a bowl game each of the last five years and seven of the last eight.

With Florida State’s victory at Duke last Saturday, Tommy is now just 287 victories behind his father, Bobby, who has a record of 337-96-4 in his 38 years as a head coach.

New Assistants Have Had Positive Impact Tommy Bowden has two new assistants on his coaching staff and they have had a positive impact on the Tigers 2003 season. David Blackwell is in his first year coaching Clemson linebackers and Dabo Swinney is in his first year handling the wide receivers. Both positions have been keys to Clemson’s 3-1 start, especially the recent three-game winning streak.

Clemson’s top two tacklers, LeRoy Hill and John Leake, are both Blackwell prot. Hill leads the club with 49 and is ranked in the top five in the ACC in tackles per game, sacks and tackles for loss. Leake is sixth in the ACC in tackles per game with a 10.8 average and is coming off his best game of the season. Leake had a season high 14 tackles, including a career high three tackles for loss at Georgia Tech. He was named ACC Defensive lineman of the week for that performance.

Clemson’s wide receivers have been key to Clemson already reaching the 1000-yard passing mark just four games into the season. Airese Currie, Kevin Youngblood and Derrick Hamilton all rank among the top eight receivers in the ACC in a catches and reception yards basis.

Blackwell joined the Clemson program after serving as linebackers coach at Pittsburgh the last three seasons. He was a big reason for the Panthers improvement to a nine-win season and top 25 finish in 2002. Swinney had not coached the last two years, working in private business. He played for Alabama, under wide receiver coach Tommy Bowden, then became a full-time coach with the Crimson Tide in 1996. He was a member of Alabama’s National Championship team of 1992 and coached in five bowl games with the Crimson Tide.

Bowden Successful on ACC Road Clemson Head Coach Tommy Bowden has a 20-13 record in ACC play in his five years, 11-6 on the road and 9-7 at home. Most coaches don’t have a better conference record in road games than home games, but that has been the case for Bowden. That represents quite a turnaround because Clemson teams from 1989-98 were 17-19 on the road in the league in that 10-year period just prior to Bowden’s arrival.

Clemson is third in winning percentage in ACC games since Bowden became the Tigers head coach in 1999. The Tigers trail only Florida State and Virginia. The Tigers and Cavaliers are tied in the loss column, as Virginia has played one more league game than the Tigers so far this year.