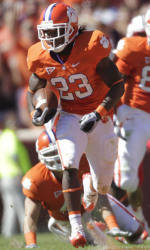 Clemson vs. Maryland Series  Clemson holds a 31-26-2 advantage in the series with Maryland. The first game of the series was played in 1952, one year before both teams became charter members of the ACC. The two schools have played every year since 1952, the longest active continuous rivalry for the Tigers against an ACC school. It is the longest continuous rivalry for Maryland as well. The Terps won each of the first four games in the series before the Tigers got a tie in 1956 and a win in 1957.  The visiting team won four straight games between 2005-08. But, the home team has pulled off an upset each of the last two years. Maryland won just two games all year in 2009, but defeated a Clemson team that won nine games and played for the ACC Championship. Then last year Clemson finished with a 6-7 record, but defeated a nine-win Maryland team that finished in the final top 25 by a 31-7 score.  Clemson had won eight in a row and 13 of 14 prior to Ralph Friedgen’s return to his alma mater for the 2001 season. Friedgen finished 6-4 against Clemson, including a 3-2 record at Death Valley and 3-2 in Byrd Stadium.  The three meetings between 2004-06 were decided within the last three minutes of the game and the average victory margin in those three games was just 2.7 points. While Clemson won by 24 points last year, five of the last seven games have been decided by four points or less.  Clemson held Maryland to just 12 total points in winning every game between 1993-98. Clemson recorded four shutouts, including three in a row during that time period. During Clemson’s eight-game winning streak in the series from 1993-2000, Clemson held Maryland to an average of 7.0 points per game, while scoring 26.8 points per game themselves.  In 2002, Maryland defeated Clemson in Death Valley, its first win at Memorial Stadium since 1985. It was Ralph Friedgen’s first game as Maryland head coach against Clemson in Death Valley. Clemson has won 10 of the last 13 between the two teams in Death Valley. Maryland won at Clemson in an upset in 2006 by a 13-12 score. Had Clemson won that 2006 game it would have played in the ACC Championship game.  Saturday’s game will be a meeting of two of the traditional powerhouses of the ACC. Both Clemson and Maryland have been in the ACC since its inception in the fall of 1953. Both teams played their first ACC game against each other on October 3, 1953 at Clemson, a 20-0 Maryland victory. Clemson has the most ACC wins in the history of the league and Maryland is second.  Clemson and Maryland have both won the National Championship, the Terps during that first ACC season in 1953, and Clemson in 1981. Clemson has the most ACC championships with 13, while Maryland is third with nine.  The two teams played at the end of the season in most years between 1978-88 and the game usually decided the ACC championship. That was certainly the case in 1978 when the Tigers won 28-24 at College Park, clinching an undefeated season in the league over Maryland. It was 11th ranked Maryland’s only league loss that season.  Clemson also clinched the ACC championship with a November victory or tie over Maryland in 1981, 1982, 1986, 1987 and 1988. Maryland clinched the ACC Championship in 2001 with a 37-20 victory over Clemson in College Park. The Terps also clinched the title in 1985 with a victory in Death Valley.