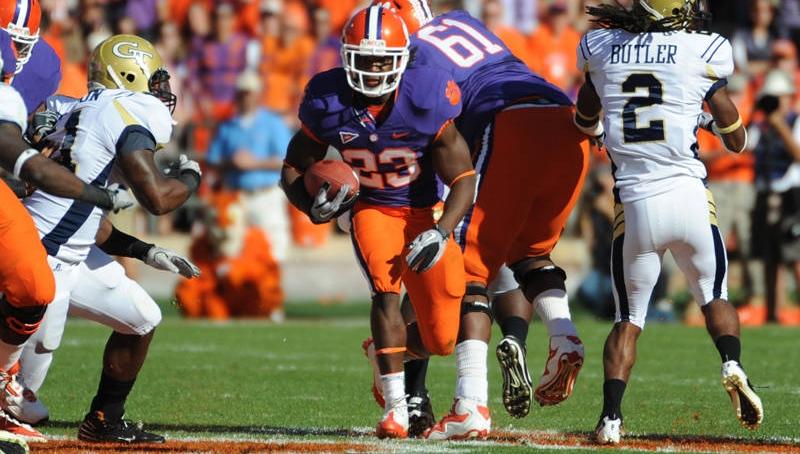 In 2009, Georgia Tech won in Atlanta in the regular season 30-27 and in the ACC Championship game in Tampa by a 39-34 score. That ACC championship game was a bizarre affair as neither team punted and both teams gained at least 300 yards rushing. It was the first game in Clemson history that both teams didn’t punt, and the only FBS game in college football in 2009 year in which both teams had at least 300 yards rushing. Georgia Tech won last year at Tech 31-17, ending fifth ranked Clemson’s eighth game winning streak.

Clemson was victorious in 2006 behind the running of James Davis and C.J. Spiller. The duo combined for 332 yards rushing and four touchdowns, three rushing, in the 31-7 Clemson win at Clemson, a day in which ESPN’s College Gameday was in town for the first time. Davis had a career high 216 yards rushing and Spiller became the first player in Clemson history with a touchdown rush and a touchdown reception of at least 50 yards in the same game.

Georgia Tech was victorious in 2005 in the lowest scoring game in the series in 15 years when Tech won 10-9 in Atlanta. That was Clemson’s only loss over the last seven games of the 2005 season. Clemson cut the margin to 10-9 on Jad Dean’s third field goal of the game with 5:36 left, but the Tigers were hurt by a holding penalty on their last possession.

Georgia Tech has won seven of the last nine meetings and five of those seven wins have been by a touchdown or less. While Tech has won seven of the last nine, Georgia Tech has outscored Clemson by just four total points, 192-188 Georgia Tech has a 50-25-2 lead in the series with Clemson dating to a 23-0 Tiger win in Augusta, GA in 1898, just the 11th game in Clemson football history. In fact, Clemson won the first four games of the series, including games in 1902 and 1903 when John Heisman was at the helm. Clemson defeated Georgia Tech in Atlanta 73-0 in 1903 with Heisman as head coach. Heisman then left Clemson after that season to become Georgia Tech’s head coach.

Since Georgia Tech joined the ACC in 1983 Georgia Tech has won 16 and Clemson has won 14, another example of the competitiveness of the series. Tech actually joined for the 1979-80 academic year, but did not compete for the football championships, nor play Clemson as an ACC game, until 1983.

Clemson has struggled in Atlanta over the years as Tech has a 43-13-2 advantage in the series in games there. Clemson has lost four in a row in Atlanta with the last win coming in 2003 by a 39-3 score. Clemson running backs coach Tony Elliott had a touchdown reception in that game for the Tigers.

Clemson and Georgia Tech Have High Powered OffensesIt seems like everyone has a high powered offense these days. Tajh Boyd threw for 367 yards at Boston College last week and it was not even the most passing yards by an ACC quarterback….in fact it was nearly 200 yards fewer than Miami quarterback Stephen Morris, who threw for 566 against NC State. Five different FBS quarterbacks threw for over 500 yards on September 29. There had been just one total the previous four weeks of the season.

Offense could be the order of the day again in Death Valley this Saturday. A look at the numbers shows that Clemson averages 40.2 points per game and Georgia Tech averages 39.2. Clemson averages 510.8 yards of total offense per game and Tech is at 487.6. The Tigers are more balanced with over 1000 yards rushing and 1500 yards passing already this year. Tech has 329 of its 487 yards per game basis on the ground.

The balanced rushing attack of the Yellow Jackets has been a thorn in Clemson’s side since Paul Johnson came to Georgia Tech. He has beaten the Tigers four out of five conteststhanks to a ground game that has averaged 293 yards per game in those games.

Clemson’s only win in the last five against Tech came in 2010 when the Tigers held the Yellow Jackets to 13 points in a 27-13 victory. That Clemson defense had eight players who are now on NFL rosters.

Tech will have a balanced rushing attack as well and it will be led by quarterback TevinWashington, who guided the Yellow Jackets to a 31-17 win over the Tigers last year, breaking Clemson’s eight-game winning streak to open the season. Washington had 27 carries for 176 yards against the Tigers last year and threw for another 60 yards, leading a Tech offense that gained 443 in 76 snaps.

This year, Washington leads the team in rushing with 304 yards and has scored an incredible 11 touchdowns, most in the ACC, including four last Saturday against Middle Tennessee State. He has become an accomplished passer as well with an efficiency rating of 158.3, as he has completed 40-64 passes for 660 yards and three scores. That efficiency rating is just three points behind Clemson’s Tajh Boyd.

Zach Laskey has added 303 yards on the ground in support of Washington, while Orwin Smith continues to gain yardage at a record rate. He has 245 rushing yards this year on just 25 attempts for a 9.8 average. He is the ACC’s career leader in rushing yards per attempt with 9.6 for his career. He is coming off a game in which he had 223 all-purpose yards as he also contributes to their passing game and return game.

The top receiver is Jeff Greene with 10 catches for 211 yards. Smith has added 123 receiving yards on 10 receptions.