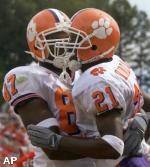 Clemson vs. Georgia on ESPN in Prime Time

Clemson, SC – The Clemson vs. Georgia football game scheduled for Saturday, August 31 in Athens, GA will kickoff at 7:45 PM. The announcement was made on Wednesday. This means that at least two of Clemson’s first five games will be televised nationally by ESPN. The Georgia Tech game on September 14th also could be chosen by the network.

The kickoff time for four of Clemson’s first five games has been announced. The home opener against Louisiana Tech on September 7 will kickoff at 1:00 PM, as will the September 21 game against Ball State. The Florida State game in Tallahassee, FL, set for October 3, will kickoff at 7:45 PM and will also be televised by ESPN.

The August 31 game in Athens will mark the first time the two teams have met since 1995 when Georgia won a night game played at Clemson, 19-17. Georgia has won three in a row over the Tigers. Clemson’s last win in the series took place at Clemson in 1990, a 34-3 Tiger victory.