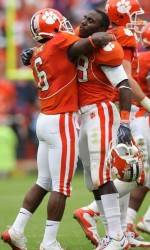 Tickets for the Clemson vs. Florida State game are still available by calling 1-800-CLEMSON. Saturday’s game is designated as a Solid Orange event, so Tiger Fans, don’t forget to wear ORANGE!

Milestones in Range, Streaks  Jacoby Ford and C.J. Spiller need a combined 293 all-purpose yards to become the top all-purpose duo in NCAA history. Spiller and Ford have a combined 9961 and the record is 10, 253 by Marshall Faulk and Darnay Scott of San Diego State between 1991-93.

 C.J. Spiller needs one reception to become Clemson’s career leader in receptions by a running back. Spiller and Travis Zachery both have 105 career receptions.

 Kyle Parker can break the Clemson record for wins by a starting freshman quarterback if he starts and the Tigers gain victory over Florida State. He has five, the same total Rodney Williams had in 1985 as a red-shirt freshman.

 Jacoby Ford has now caught at least one pass in 22 consecutive games he has played.

 Saturday will be Thomas Austin’s 32nd consecutive start in the offensive line.

 Clemson team has made 116 consecutive extra points. Current kicker Richard Jackson is 25-25 this year following 88 in a row by Mark Buchholz in 2007-08. John Early.

Clemson vs. Florida State Series  Florida State has a 16-6 advantage in the series with Clemson, but the Tigers have won four of the last six, including three in a row from 2005-07. Clemson became the first ACC school to defeat the Seminoles three years in a row when it won in 2007 at Clemson by a 24-18 score.

 Florida State won last year in Tallahassee to break Clemson’s three-game winning streak in the series by a 41-27 score. The 14-point margin is the largest margin of defeat for Dabo Swinney in his 15-game coaching career. But, even in that game the Tigers were just seven down in the final minute. FSU scored a late touchdown after Clemson failed to recover an on-side kick.

 Clemson won the last meeting at Clemson in 2007 by the 24-18 score, as James Davis rushed for 102 yards in 18 attempts. In 2006, Davis scored the game winning touchdown on a one-yard run with eight seconds left.

 Clemson has won three in a row over the Seminoles at Death Valley. Florida State has not won at Clemson since 2001. Florida State won that game by a 41-27 score, the exact same score as its victory over Clemson last year in Tallahassee. In fact three of Florida State’s last four wins in the series dating to 2001 they have scored exactly 41 points against the Tigers.

 Clemson has four wins over Florida State since they joined the ACC in 1992 and two prior to that 1992 season. Those wins came in 1976 and 1989. The 1989 victory came in Danny Ford’s last year as Clemson coach, a 34-23 victory in Tallahassee. The Tigers used a 73-yard scoring run by Terry Allen and a 73-yard interception return by Wayne Simmons, to jump to a 28-10 halftime lead. That was Florida State’s last loss that year and the Seminoles went on to a 10-2 record and number-three final ranking in the AP poll. Clemson also concluded the season 10-2 and ranked 12th in the final AP poll.

 Florida State won 11 consecutive games in the series prior to Clemson’s victory in 2003. All the wins were recorded by Bobby Bowden, who has a 14-6 all-time record against Clemson. Bobby Bowden has lost his last three appearances at Clemson’s Death Valley, but his 6-3 record in the facility is still the most victories by an opposing head coach. Vince Dooley (Georgia) is second with five.

 The Clemson vs. Florida State games between 1999-07 were known as The Bowden Bowl, as Clemson was coached by Tommy Bowden and Florida State by Bobby Bowden. Bobby had a 5-4 advantage in those nine games, but Tommy won the last three. It is the only meeting of father and son head coaches in Division FBS history. The first Bowden Bowl came in 1999, a 17-14 victory for Florida State. That FSU team went on to win the national championship and the 17 points and three-point victory margin were the smallest for Florida State in that championship season

 Today will end a streak. Clemson had faced a top 25 Florida State team 19 consecutive meetings prior to this Saturday. Florida State had been ranked in the top 25 for every meeting against Clemson since 1988. The Seminoles were ranked 24th in both polls entering the game last year.

 Five of Clemson’s six wins in the series have been against top 20 Florida State teams. The only time Clemson beat an FSU team not ranked in the top 25 was in 1976 when Clemson won 15-12 in Bobby Bowden’s first year as head coach.