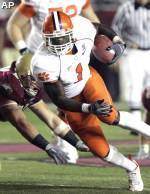 Clemson vs. Florida State Series Florida State has a 15-6 advantage in the series with Clemson, but the Tigers have won the last three and four of the last five. Clemson became the first ACC school to defeat the Seminoles three years in a row when it won last year at Clemson by a 24-18 score. The current Clemson seniors will have a chance to become the first ACC senior class to beat the Seminoles four straight years. Wake Forest has won three in a row over Florida State, including this year’s win in Tallahassee.

Clemson won last year by the 24-18 score, as James Davis rushed for 102 yards in 18 attempts. In 2006, Davis scored the game winning touchdown on a one yard run with eight seconds left.

Clemson’s other two wins in the series took place at Florida State, in 1976 and in 1989. The 1989 victory came in Danny Ford’s last year as Clemson coach, a 34-23 victory. The Tigers used a 73-yard scoring run by Terry Allen and a 73-yard interception return by Wayne Simmons, to jump to a 28-10 halftime lead. That was Florida State’s last loss that year and the Seminoles went on to a 10-2 record and number-three final ranking in the AP poll. Clemson also concluded the season 10-2 and ranked 12th in the final AP poll.

Florida State won 11 consecutive games in the series prior to Clemson’s victory in 2003. All the wins were recorded by Bobby Bowden, who has a 13-6 all-time record against Clemson. Bobby Bowden has lost his last three appearances at Clemson’s Death Valley, but his 6-3 record is still the most victories by an opposing head coach in the facility. Vince Dooley (Georgia) is second with five.

The Clemson vs. Florida State games between 1999-07 were known as The Bowden Bowl, as Clemson was coached by Tommy Bowden and Florida State by Bobby Bowden. Bobby had a 5-4 advantage in those nine games, but Tommy won the last three. It is the only meeting of father and son head coaches in Division FBS history. The first Bowden Bowl came in 1999, a 17-14 victory for Florida State. That FSU team went on to win the national championship and the 17 points and three-point victory margin were the smallest for Florida State in that championship season

Clemson will face a top 25 Florida State team for the 19th consecutive time when the two teams meet in Tallahassee. Florida State has been ranked in the top 25 for every meeting since 1988. The Seminoles are ranked 24th in both polls this week. Five of Clemson’s six wins in the series have been against top 20 Florida State teams. The only time Clemson beat an FSU team not ranked in the top 25 was in 1976 when Clemson won 15-12 in Bobby Bowden’s first year as head coach.