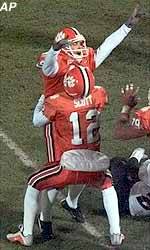 Clemson vs. Duke Moved To December 1

Clemson, SC – The Clemson vs. Duke football game, originally scheduled for September 15th at Clemson, will be played December 1 at Clemson Memorial Stadium. The contest was postponed due to the terrorist attacks on New York and Washington last Tuesday. The game will kickoff at 1:00 PM.

The ACC also announced Monday that the Georgia Tech at Florida State football game will also be played on December 1.