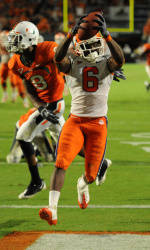 Milestones in Range, Streaks  C.J. Spiller needs one reception to become Clemson’s career leader in receptions by a running back. Spiller and Travis Zachery both have 105 career receptions.

 Kyle Parker can tie the Clemson record for wins by a starting freshman quarterback if he starts and the Tigers gain victory over Coastal Carolina. He has four and the record is five by Rodney Williams in 1985.

 Jacoby Ford has now caught at least one pass in 22 consecutive games he has played.

 Saturday will be Thomas Austin’s 32nd consecutive start in the offensive line.

 Clemson team has made 109 consecutive extra points. Current kicker Richard Jackson is 21-21 this year following 88 in a row by Mark Buchholz in 2007-08. Last miss was in the Music City Bowl at end of the 2006 season by John Early.

Spiller has three kickoff returns for touchdowns this year, a Clemson season record. The national record is five by Ashlan Davis of Tulsa in 2004.

Spiller now has seven total kick returns for touchdowns in his career, six on kickoffs and one on punt returns. The national record for a career is eight held by four players. Cliff Branch of Colorado (1970-71), Johnny Rogers of Nebraska (1970-72), Derek Abney of Kentucky (2000-03) and Chad Owens of Hawaii (2001-04) all had eight total kick returns for touchdowns over their respective careers.

Spiller and Ford Soon to be Greatest All-Purpose Duo on NCAA HistoryC.J. Spiller and Jacoby Ford are the top two ranked active players in the ACC in terms of all-purpose yardage. Spiller has 6,363 for his four years and Ford has 3,515 for a total of 9,878. The national record for career all-purpose yards by two players in the same class is 10,253 by Marshall Faulk and Darnay Scott of San Diego State between 1991-93.

That means Spiller and Ford need just 376 all-purpose yards to become the top all-purpose tandem in NCAA history. They have combined for 2,105 in seven games so far this year, an average of 300.7 per game. So at that pace they would set the record against Florida State on November 7.

Parker Quarterbacks Tigers to Top 10 Road Win Clemson red-shirt freshman Kyle Parker quarterbacked Clemson to a 40-37 overtime victory at 8th ranked Miami (FL) on October 24th. Parker became just the second freshman to quarterback a team to a win over a top 10 team this year. The only other freshman to do it this year is Southern California freshman Matt Barkley who led the Trojans to a 18-15 win at seventh ranked Ohio State in September.

Parker was named national Freshman of the Week by Rivals.com and ACC Freshman of the Week for his performance in the win over Miami. He completed 25-37 passes for 326 yards and three touchdowns, including the game winner, a 26-yard pass to Jacoby Ford on the last play in overtime.