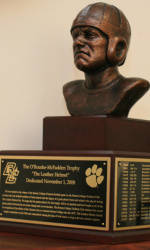 Clemson vs. Boston College Series  Clemson and Boston College are tied at 9-9-2 in the series that dates to the 1940 Cotton Bowl. Boston College won last year in Boston 16-10, but Clemson had won the two previous years, both under current Head Coach Dabo Swinney. The Tigers won 27-21 at Chestnut Hill in 2008 and 25-7 at Clemson last year.  Clemson has struggled against Boston College’s defense the last two years. The Tigers have two touchdowns in the last two years against the Eagles and neither is an offensive score. Clemson’s only touchdown in the 25-7 win in 2009 came on a punt return by Richard Jackson had six field goals. Last year Clemson’s only touchdown was an interception return by Rashard Hall.  The series dates to the 1939 season and the January 1, 1940 Cotton Bowl. That was a landmark victory for the Clemson program, the school’s first bowl game and the school’s first ever win over a top 20 team. Boston College was ranked 11th in the nation entering the game. Clemson won 6-3 behind 115 yards rushing from Charlie Timmons and four pass deflections in the fourth quarter by Clemson legend Banks McFadden.  This will be the 21st meeting between Clemson and Boston College. Only Miami (FL) had played Boston College more among ACC teams entering this season.  Five of the six meetings between the two teams since Boston College joined the ACC in 2005 have been decided by a touchdown or less. The 2005 game went into overtime and the 2006 game was a double overtime affair in Boston. The 2007 game was a 20-17 Boston College win at Clemson that decided the Atlantic Division title. In 2008, Clemson won 27-21, then the Tigers took a 25-7 victory in 2009 behind a defense that allowed Boston College just 54 yards of total offense in 49 plays. Last year’s game was a defensive struggle won by BC, 16-10.  Two of Clemson’s victories in the series took place during undefeated Tiger seasons. Clemson won 26-19 in 1948 on the way to a perfect 11-0 season, and won 35-14 in 1950 on the way to a 9-0-1 season.  In 1983, at Chestnut Hill, the Eagles gained a 31-16 win behind Doug Flutie. Clemson had a 16-3 lead with 25 minutes left in the game, but the Eagles went on a 28-0 run to end the contest behind Flutie. The 1984 Heisman winner, was 20-36 for 223 yards and two touchdowns against a Clemson defense that featured All-American William Perry. The Eagles gained 504 yards of total offense on the night, 281 rushing and 223 passing. It was Clemson’s only loss in 1983 (9-1-1).  The two teams tied in a 1982 game in Death Valley. The game was televised by CBS on a regional basis, the first CBS broadcast from Clemson’s Memorial Stadium. Clemson had a 14-0 lead at intermission, but sophomore quarterback Doug Flutie led Boston College back to take a 17-14 lead. The Tigers tied the game in the fourth quarter, on a field goal by Donald Igwebuike, who played soccer and football for the Tigers that fall. He then had another attempt from 43 yards with eight seconds left, but the kick missed and the game ended in a 17-17 tie.  Clemson had just two losses and two ties over a three-year period from 1981-83. One of the losses and one of the ties came against Boston College in that 1982-83 period.  The 2005 game at Clemson was an overtime meeting, a 16-13 Boston College victory, It was the first between the two schools as an ACC matchup. The game was tied 10-10 at the end of regulation. The two teams played a double overtime affair in 2006, a 34-33 Boston College victory. A missed extra point in overtime proved costly for the Tigers.  In 2009 when Clemson won it was the Tigers first win over the Eagles at Clemson since 1958. Clemson won that 1958 game, 34-12. The two teams are now tied 3-3-1 in games played at Clemson in the series.  The two teams played three games at famed Fenway Park in Boston, the home of the Boston Red Sox. Clemson won the first meeting there in 1941 (just 13 days after Ted Williams finished his .406 season for the Red Sox) by a 26-13 score. The same two teams met at Fenway the following year, and Boston College won, 14-7. The two teams played to a 14-14 tie in 1953 at Fenway. So the series stands at 1-1-1 in games played at Fenway Park.  The two teams also played at Braves Field in Boston, then the home of the National League’s Boston Braves (now the Atlanta Braves). Clemson had a 3-1 advantage in games played at Braves Field all between 1942-52.  Overall, Boston College leads 6-5-1 in games played in Boston or Chestnut Hill.

Clemson won it the first season with a 27-21 victory in Boston, then won it in 2009 with a 25-7 win at Clemson. Last year, Boston College took the trophy with a hard fought 16-10 victory at Chestnut Hill.

The trophy features a leather helmet replica of those used by Charlie O’Rourke of Boston College and Banks McFadden of Clemson, when they competed against each other in the 1940 Cotton Bowl in Dallas, TX.

In addition to the trophy presentation, the Boston College Gridiron Club will present a replica leather helmet to the MVP of the winning school. The helmet will reflect the colors of the winning team.

The Boston College Gridiron Club developed the idea in order to honor the tradition at both schools and to honor the legacy of Charlie O’Rourke and Banks McFadden, who played during the leather helmet era. Clemson and Boston College are both in the Atlantic Division of the ACC and will play every year.

O’Rourke led Boston College from the quarterback position to a 26-3-2 record in his three years as the quarterback of the Eagles between 1938-40. One of those three losses was to McFadden and Clemson in the 1940 Cotton Bowl. O’Rourke had his jersey retired at Boston College and was inducted into the College Football Hall of Fame in 1972.

McFadden led the Tigers to a 9-1 record in 1939 as the starting quarterback. Regarded as the greatest all-around Clemson athlete of the 20th Century, he was an All-American in football and basketball at Clemson. The 1939 football team finished 12th in the final AP poll, Clemson’s first top 20 season on record, and the win over Boston College in the Cotton Bowl was Clemson’s first bowl appearance. In the spring of 1939 he led Clemson to the Southern Conference Basketball championship. McFadden was inducted into the College Football Hall of Fame in 1959, Clemson’s first inductee.