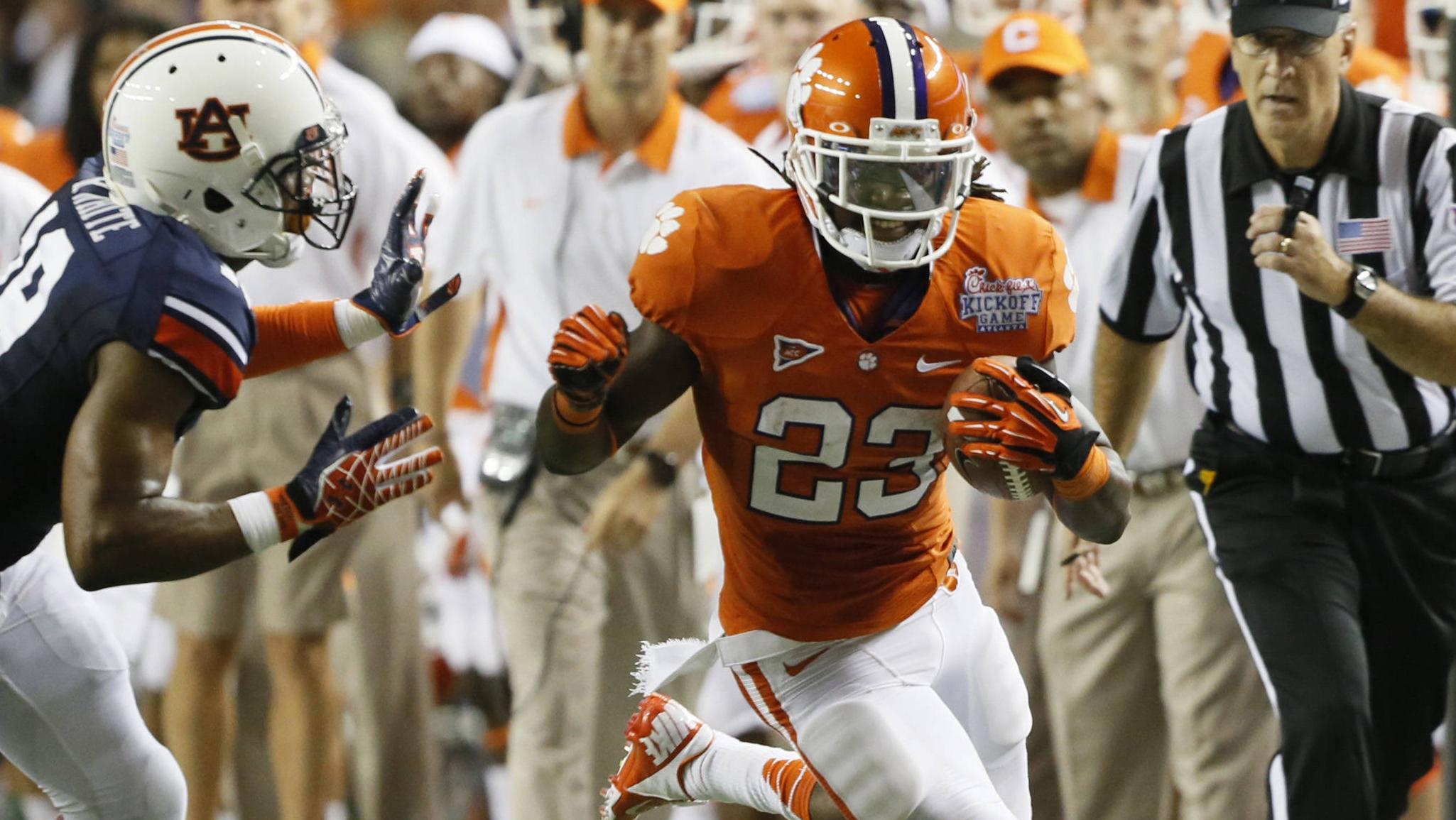 Clemson vs. Ball State Series Clemson and Ball State meet every 10 years whether they like it or not. The Tigers are 2-0 against Ball State and the two previous games were played in 1992 and 2002, respec­tively, both at Memorial Stadium.

Rodney Blunt led the Tigers offensively with 20 rushes for 96 yards, while Ronald Wil­liams had 9-58 and a touchdown. Williams’ son, DeShawn Williams, is now a starting defensive tackle for the Tigers. He scored Clemson’s final touchdown of the game on a 17-yard run.

Clemson had 255 yards rushing for the day on 54 attempts and finished the game with 291 yards of total offense. Clemson had just 36 yards passing. One of the Tigers with a catch was Terry Smith, the late uncle of current Clemson receiver DeAndre Hopkins.

Tim Jones was Clemson’s top tackler with 12, while Robert O’Neal had 11. Both play­ers also had interceptions.

In 2002, Ball State scored the first touchdown of the game to complete a 77-yard 13 play drive. But that was all the scoring for the Cardinals as Clemson went on a 30-0 run over the last three quarters. Clemson had an efficient offense that produced 203 yards rushing and 209 yards passing. Willie Simmons was 17-25 for 188 yards and a touchdown, while Charlie Whitehurst was 4-4 for 21 yards. J.J. McKelvey had 10 catches for 123 yards and a score, while Yusef Kelly had 21 rushes for 99 yards and a score.

John Leake led Clemson’s defense with 14 tackles, while Eric Meekins added 11. Bryant McNeal had two sacks, and Leake had one for the Clemson defense, which held Ball State to 220 yards of total offense, just 153 after the first drive.

Ball State Update Ball State comes into Saturday’s game off a season opening 37-26 conference win over Eastern Michigan. The Cardinals had an of­fensive day that would make any coordinator and head coach proud.

All Pete Lembo’s team did was gain 596 yards of total offense, rush for 329 yards, average 6.2 yards per play, and pick up a school record 36 first downs. They ran 96 plays, so it could be quite an up tempo game on Saturday afternoon at Death Valley. It was the third most plays in Ball State history.

Quarterback Keith Wenning, who made his 23rd consecutive start at quarterback for Ball State, completed 26-41 for 267 yards in the opening game. He now has 4256 career passing yards, sixth most in school history. The performance in the opener was his sixth game of at least 250 passing yards.

He was supported by a 100-yard receiver, Jamill Smith who had 7-119 (same yardage total as Nuk Hopkins against Auburn), and a 200-yard rusher, Jahwan Edwards, who had 20-200 and three touchdowns. Edwards had a 75-yard touchdown run in the opening moments of the second half to give Ball State a 20-13 lead. That turned out to be the key play of the game. Smith also had 100 yards in kickoff returns to go with his career high 119 receiving yards, and finished with 240 all-purpose yards. Edwards had 207 all-purpose.

The Ball State defense is led by senior co-captain and middle linebacker Travis Freeman with nine tackles in the opener. Chris Pauling and J. Garrett had seven tackles apiece.

Ball State has an outstanding special teams combination in kicker Steven Schott and punter Scott Kovanda. Schott made a career long 52-yarder against Eastern Michigan and had three field goals overall. Kovanda had three punts inside the 20-yard line to set the Cardinals defense in good field position. He had 22 inside the 20 last year as a junior.