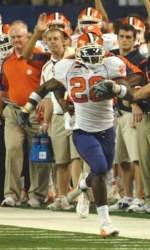 Clemson, SC – The Clemson vs. Auburn game in the Chick-fil-A Bowl had a 5.1 rating according to mediaweek.com, the highest rated of the 16 bowl games broadcast by ESPN during the college bowl season.

It marked the second time his year at Clemson game on ESPN had a rating of at least 5.0 during the 2007 season. Clemson’s season opener with Florida State on Labor Day night had a 5.03 rating, the highest rated college football game over the Labor Day weekend.

Clemson had nine games telecast over ABC or the ESPN family of networks during the 2007 season, including each of the last four games.