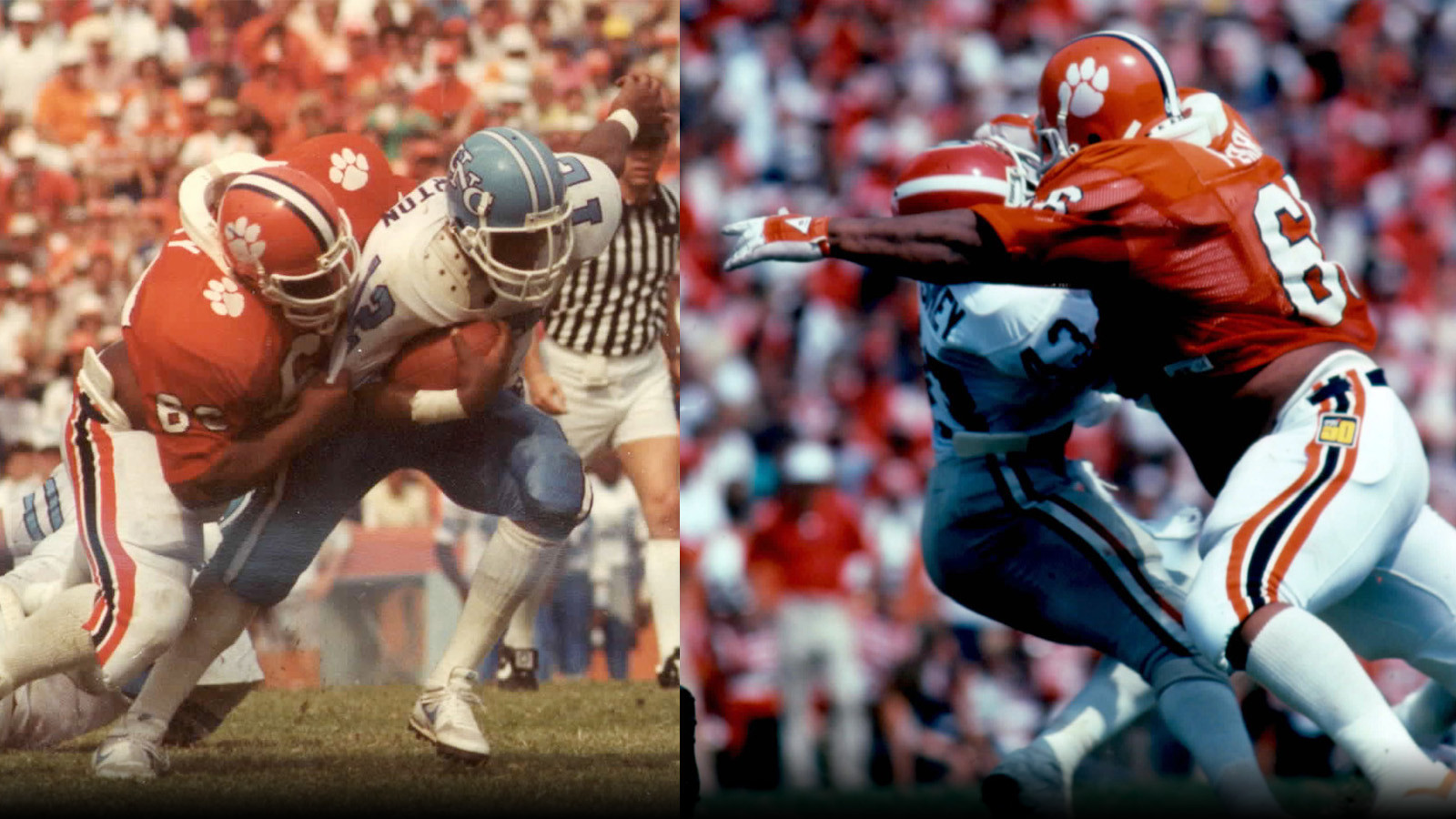 It seems very unusual, but it’s funny how a major appliance’s name is part of Clemson football lore and tradition in the early ’80s. When you hear the words “refrigerator” or “fridge” with Clemson football, you automatically think of the one and only William Perry. The name William Perry and his monikers such as Refrigerator, Fridge and GE became household words all across America during his Clemson and professional career. His name was just as popular as any celebrity and his fame wide spread. Football fan or not, everyone in the decade of the 1980’s heard of William “The Refrigerator” Perry. The big defensive lineman and his familiar smile became commonplace in television commercials, endorsements, and interviews on televisions, radio and newspaper.  He was really bigger than life. Perry was a highly recruited athlete during his high school years.  Fortunately for Tiger Nation, the product of Aiken High School chose to be a Clemson Tiger. During his freshman year he picked up the nickname “Refrigerator.” While riding an elevator, teammate Ray Brown observed how big his freshman teammate was. “I gave him the nickname ‘GE’ because he was as big as a refrigerator,” said Brown. We were standing in the elevator in the dorm and he nearly took up the whole elevator.  That’s when I gave him the nickname.” The nickname stuck and he became know as the “Refrigerator” or “Fridge” ever since. He gave opponents fits during his Clemson career. “To resemble William Perry, we are going to rent a Winnebago this week for our offensive line to practice against,” said former Duke Head Coach Steve Sloan as his team prepared for Clemson. “When William Perry is in the game, his effect on the opposing line of scrimmage is devastating.  I’ve never seen that kind of bulk move that quickly by an defensive player,” former Georgia Head Coach Vince Dooley once said. One may think that William could have tired of the talk about his size, but he took it in stride.  The jovial Perry looked as if he enjoyed it. A professor once jokingly told him in class that he should sit on one side of the classroom and everyone else sit on the other side so the classroom would not tilt.  There was laughter and William with his familiar smile and laugh was the loudest. One of his famous quotes was “even when I was little, I was big.”  When he was in the sixth grade he weighed 200 pounds. But what an athlete he became. At Clemson, he was the first Tiger three-time All-American. He was ranked first among Division I players in tackles for loss as a senior with 2.45 per game.  He was the first Tiger to be a three-time selection to the All-ACC team.  He became the Clemson all-time leader in sacks (25) until his younger brother Michael Dean Perry broke the record three years later. He was the all-time ACC leader in tackles for loss (60) in his career until Michael Dean broke it by one in 1987. It was only fitting for Perry that he was a Lombardi Award finalist in 1984. This award is given to the best defensive lineman in the country. Perry ran into success no matter what level he played. Clemson won the National Championship as a rookie in 1981 and he was a member of the Super Bowl Champion Chicago Bears as a rookie in 1985. His Super Bowl Ring was the largest ever made, a size 23. In that Super Bowl he scored a touchdown as a fullback from one yard out.  Why not?  Who could tackle the Fridge? He was a first-round draft pick of the Bears. Perry’s professional career was a long one, as he played for the Bears in 1985 to the 1993 season. He also played for The Eagles towards the end of his career. After his playing days, Perry’s honors kept coming his way. He was named to Clemson’s Centennial Football Team in 1996, and he was inducted into the Clemson Athletic Hall of Fame in 2002. He was named to the ACC’s 50th-Year Anniversary team in 2002 and was named one of the 50 greatest male athletes in ACC history in 2003. Perry was also inducted into the South Carolina Athletic Hall of Fame in 2005. Recently, Perry was named to the South Carolina Football Hall of Fame on May 30, 2014. Another well-deserved honor, as he is one of the best football players that this state has ever produced. The giant of a man will always be large in the annals of Clemson football, and his legend will always keep growing.