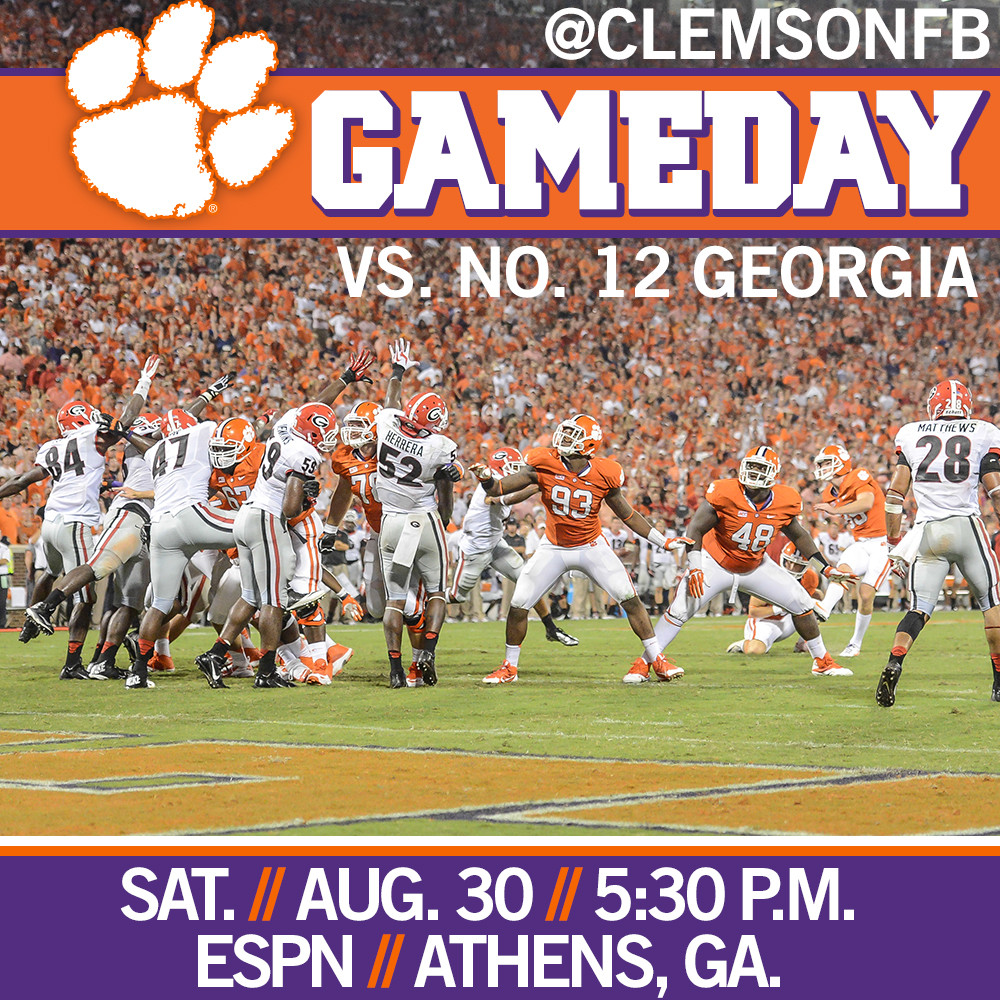 As Clemson football fans quickly exhausted the school’s 7,500-ticket allotment for the season opener against Georgia in Athens, those without tickets began asking about the possibility of gathering in Memorial Stadium to watch the game on the video boards. Therefore, Clemson announced plans to open the lower bowl of the stadium and invite students and the community to watch the game together.

• Georgia holds a 41-18-4 advantage in the series that dates to the 1897 season. Georgia won that first meeting 24-0 in Athens in the season opener. It was the fourth game in Clemson history and the first time Clemson played a game outside the state of South Carolina. Georgia’s football history dates to 1892 and that first meeting with Clemson was the 25th in Bulldog history.

• Clemson’s last win in Athens took place on September 20, 1986 when David Treadwell kicked a 46-yard field goal on the last play of the game to give the Tigers a 31-28 victory. Clemson was coming off a heart breaking home loss to Virginia Tech the previous Saturday. Georgia was ranked No. 14 in the nation entering the game. Clemson went on to an 8-2-2 season, ranked No. 17 in the final AP poll and an ACC Championship, while Georgia finished 8-4.

• Clemson defeated No. 5 Georgia 38-35 last year in the season opener at Memorial Stadium. The Tigers became the first non-SEC school to defeat top-10 SEC schools in consecutive games. The Tigers had beaten a top-10 Louisiana State in the Chick-fil-A Bowl to end the 2012 season.

• Georgia Head Coach Mark Richt has a son, Jon, who signed with the Tigers in the recruiting class of 2006. Jon was a quarterback for the Tigers who red-shirted that season. He later transferred to Mars Hill. Jon was coached at Clemson by Tommy Bowden.

CLEMSON, S.C. — Clemson football fans are invited to the BI-LO located at 2607 Woodruff Road in Simpsonville this Saturday, August 30 for the first live Oconee Medical Center Tiger Tailgate Show of the season as the Tigers travel to Athens to take on Georgia.

Tiger fans are encouraged to wear their Clemson orange and arrive early for the show, which begins at 2:30 p.m., outside the store. The fun-filled, interactive afternoon provides opportunities for fans to win tickets to upcoming Clemson home games, autographed items, a special Clemson Paw mini-fridge and gift cards from participating partners.

Those attending the show will have a chance to meet and interact with show hosts David Stein and William Qualkinbush, and could also be among the first to receive the official 2014 Tiger Tailgate Show T-shirt, courtesy of Tiger Town Graphics.

Those unable to come out to BI-LO for the day can tune in to one of the many radio station affiliates on the Clemson Tiger Sports Network. A list of affiliates is available HERE.