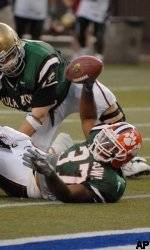 Clemson, SC – Former Clemson players Will Proctor, Reggie Merriweather and Sergio Gilliam made key plays to help the Aina Team (East Team) to an 18-10 victory over the Kai Team (West Team) at he 61st annual Hula Bowl in Honolulu, Hawaii. Clemson assistant coach Ron West was also on the sidelines as an assistant for the East Team.

Proctor was named the Most Valuable Player for the Aina team after connecting on 10-16 passes for 111 yards. Merriweather had a reception for 11 yards and 4-11 rushing, including the touchdown that allowed the East Team to take the lead with just 44 seconds left in the contest. Gilliam had a pass break up to save a touchdown in the first half.

The East Team trailed 10-3 with under three minutes left in the game when Proctor guided the team towards the winning score. He completed a key third-and-11 pass to Brett Smith of Tennessee for a key first down at the nine. Merriweather then carried from the nine to the one on first down, and scored a touchdown on second down.

East Coach Rich Rodriquez, a former Clemson assistant who is now the head coach at West Virginia, then called a two-point play. Proctor completed the two-point pass to Smith, who made a diving one-handed catch in the right corner of the endzone.

The East Team then scored another touchdown on an interception return for a score with just 20 seconds left.

Clemson has seven 2006 seniors scheduled to play in all-star games this month. In addition to the three who played in Sunday’s Hula Bowl, All-American offensive guard Nathan Bennett will play for the East Team in the East-West Game this coming Saturday. On January 27, former Tigers Dustin Fry, Chansi Stuckey and Gaines Adams are schedule to play in the Senior Bowl in Mobile, AL. The East-West Game will be shown on ESPN and the Senior Bowl will be televised by the NFL Network.