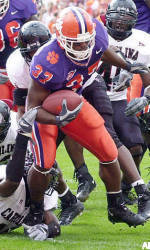 Reggie Merriweather had three touchdowns and a career-high 125 yards to lead Clemson to a 29-7 victory Saturday over the Gamecocks.

The 67-year-old Holtz told his team Thursday he’d retire after this season, reportedly clearing the way for Steve Spurrier to take over in 2005. The official announcement about Holtz is expected Monday.

“You’d have to not know that President Bush was re-elected not to know what my plans are,” Holtz said.

Several Gamecocks said the coach told them in the meeting that Spurrier is coming to Columbia. The official announcement about Holtz is expected Monday.

Spurrier, attending the Duke-North Carolina game, would not comment on what’s ahead.

Holtz had pointed to this game since last November when the Gamecocks were run out of Williams-Brice Stadium, 63-17. He said it was the most embarrassed he’d ever been and vowed it would not happen again.

Instead, he lost to the Gamecocks’ in-state rival for the fifth time in six seasons.

“That’s one of the biggest disappointments,” Holtz said. “At the same time, there’s no excuse for it.”

While the final margin wasn’t as bad as a year ago, the Gamecocks (6-5) were dominated again.

Holtz, in a black South Carolina windshirt and garnet ball cap, paced the Death Valley sidelines. Nothing he thought of worked against the Tigers.

There’s one more game for Holtz, too, before he ends his 33-season career. It could be the Peach or Independence bowls, depending on how the rest of the Southeastern Conference shakes out.

Holtz stands eighth in career victories with 249. He’s 33-37 at South Carolina. This one was bad from the start for the Gamecocks.

Cory Boyd fumbled away the opening kickoff and Clemson’s Steven Jackson recovered on the South Carolina 9. Two plays later, Merriweather rushed in from 3 yards to put the Tigers up 7-0 only 6 seconds into the game.

The Gamecocks didn’t get a first down until 10:37 was left in the second quarter. They punted nine times, five of those after going three-and-out.

About the only good thing for the Gamecocks came on Syvelle Newton’s desperation heave for a touchdown. With South Carolina facing 3-and-14 and the prospect of giving the ball up again, Newton scrambled away from two Clemson pass rushers and launched the ball nearly 60 yards in the air. Boyd turned to the right to catch the ball, held off defensive backs Tye Hill and Jamaal Fudge, and fell into the end zone to make it 14-7.