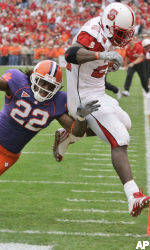 The Tigers (8-3, 5-3 Atlantic Coast Conference) looked like the ACC’s best team three weeks ago after a rousing 31-7 win against Georgia Tech. But their potent scoring offense – it had averaged nearly 43 points a game to lead the nation – was held to a touchdown and four field goals in defeats to Virginia Tech and Maryland that took the Tigers out of the ACC title hunt.

And while Clemson couldn’t exactly break out as it had before – 1,000-yard rusher James Davis was limited to 34 yards – Spiller provided enough of a spark to send the Wolfpack (3-7, 2-5) to their fifth straight loss.

After punts on its first three possessions, Clemson got moving behind Spiller. He had a 17-yard carry with Clemson on its own 12 to give the team some breathing room. Three plays later, he took off on a 52-yard TD run – Spiller’s fifth scoring play of at least 50 yards this season.

Clemson took a 14-0 lead when Will Proctor finished the drive with a 9-yard touchdown throw to Tyler Grisham.

But like most of the Wolfpack’s games – their five losses have come by a total of 28 points – this one wasn’t over.

Toney Baker accounted for 56 of 78 yards on a touchdown drive he finished with a fourth-down, 1-yard scoring run.

Moments later, Proctor was picked off by freshman defensive end Willie Young, who took it 34 yards for the tying TD.

Clemson bounced back with a 16-play series of its own. Dean connected from 26-yards out for his 50th career field goal, good for fifth on the school’s career list.

But still the Wolfpack weren’t done. Evans lofted a pass to Lamart Barrett near the end zone pylon with 25 seconds left that the official ruled out of bounds.

Moments later, Evans was chased down by defensive end Ricky Sapp to end the game.

The loss guarantees North Carolina State its second losing season in the past three years. It also spoiled a career game for Baker, who had 174 yards.

The Tigers spent the first half searching for their missing offense.

The Hokies and Terps packed the line of scrimmage with defenders. And the Wolfpack followed a similar defensive path, until Spiller opened things up.

The Tigers defense also showed some of its former fire. They held North Carolina State without points after a 1st-and-goal at the Clemson 3.

Defensive back Chris Clemmons pushed North Carolina State runner Andre Brown out of bounds near the goal line pylon on third down. Baker was stopped short on the next play, but the Wolfpack got a do over because of a Clemson offsides penalty.

This time, with the ball an inch from the end zone, defensive lineman Phillip Merliing stuffed Evans’ quarterback sneak.