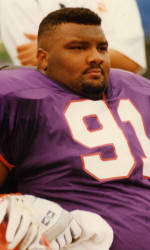 Clemson to Wear #91 Decal on Helmets to Honor McGlockton

CLEMSON, SC – The Clemson footballl team will wear a #91 decal on their helmets during Saturday’s night’s Dr Pepper ACC Championship game against Virginia Tech in Charlotte. The Tigers will wear the decal in honor of former Clemson defensive tackle Chester McGlockton, who died suddenly earlier this week. McGlockton died in California where he was an assistant coach at Stanford.

McGlockton was a starting first-team All-ACC defensive tackle on Clemson’s last ACC Championship team in 1991. Clemson had a 29-6-1 record for the three years he was on the team. A number-16 selection of the 1992 NFL draft by the Oakland Raiders, he went on to play 12 years in the NFL and was named to the NFL Pro Bowl four times.