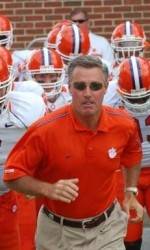 The Clemson athletic department has announced that has signed a contract to meet Vanderbilt during the 2012 and 2013 football seasons. The 2012 game will be played in Nashville and the 2013 contest will be played at Clemson.

Vanderbilt is off to a 3-0 start this season with wins over Wake Forest, Arkansas and Mississippi. The Commodores are coached by Clemson graduate Bobby Johnson, who was a top defensive back for the Tigers from 1970-72. He led the Tigers in interceptions as a junior and senior.

Clemson and Vanderbilt have met four times previously and the Commodores hold a 3-1 advantage. All four of the previous contests have been played in Nashville. Clemson’s only win in the series took place in 1958 when an eight ranked Clemson team defeated Vanderbilt 12-7 on a three-yard run by Harvey White with just three seconds remaining. The last meeting was in 1960 when Vanderbilt came away with a 22-20 victory.