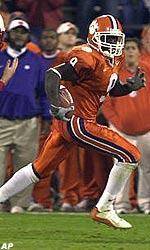 Clemson (7-5) will meet Texas Tech (8-5) for the first time in history when the two teams face off in the Mazda Tangerine Bowl on December 23. Kickoff is slated for 5:30 PM and the game will be televised by ESPN.

Individually, Texas Tech is led by quarterback Kliff Kingsbury, the Big 12 Player of the Year according to the Associated Pres. Also the Verizon Academic All-American of the Year of college football, Kingsbury led Texas Tech to 37.1 points per game this year, the seventh best scoring offense in the nation. He completed 447 of 669 passes for 4,642 yards and 42 touchdowns. His 447 completions set an all-time NCAA record. He has 1199 career completions, also an NCAA record. He ranked 13 the nation in passing efficiency and second in total offense this season.

Clemson has three players who have combined for 150 catches this year in Kevin Youngblood, J.J. McKelvey and Derrick Hamilton. Youngblood has 52 catches and ranks 73rd in the nation, while McKelvey has 50 receptions and ranks 81st. McKelvey leads the Tigers in reception yards with 752. Hamilton leads the ACC in all-purpose running with 137 yards per game and also has 48 receptions for 530 yards.

The Red Raiders have played many high scoring games this year, including a 51-48 overtime loss to NC State, the only common opponent for the two schools. Texas Tech ranks 93rd in total defense and scoring defense. The average score of their 13 games this year has been a 37-33 victory. Laurence Flugence, a senior linebacker, is among the national leaders in tackles with 187 in 13 games. Ryan Aycock is second on the club with 143 stops and has 12 passes broken up. Aaron Hunt (yes both teams have an Aaron Hunt) is the top defensive lineman with 98 tackles, including a team best seven sacks and 16.5 tackles for loss.

Junior linebacker John Leake is the top tackler on the Clemson team with 153, while senior linebacker Rodney Thomas has 152 and seven tackles for loss. Nick Eason keys the defensive line with 62 tackles, including seven sacks. He was Clemson’s only first-team All-ACC performer this year. Bryant McNeal has eight sacks and 64 tackles as a defensive end. He has 21 career sacks, sixth in Clemson history.

Clemson has a 5-7 record in games against teams currently in the Big 12 conference. Clemson’s last game against a Big 12 Conference foe took place in 2000 when Clemson defeated Missouri in a game at Death Valley, 62-9

This will be Clemson’s sixth bowl game against a Big 12 team, the first since the 1988 season when Clemson defeated Oklahoma 13-6 at the Citrus Bowl. Clemson is 3-2 against Big 12 teams in bowl games, including the 22-15 win over Nebraska in the 1982 Orange Bowl, a victory that gave Clemson its only national championship in football.

Clemson enters this game with a 7-5 record, but the Tigers have won three of their last four games. In fact, Clemson and Texas Tech have both won three of their last four entering this game. Clemson concluded the season with a 27-20 win over South Carolina on November 23 behind an offense that gained 434 yards, highest figure against South Carolina all season. Freshman quarterback Charlie Whitehurst completed 27-38 passes for 287 yards in that victory.

Clemson is 3-1 since it made Whitehurst the starting quarterback. He has completed 103-166 for the season for 1291 yards and nine scores. He set a school record for completions (34) and passing yards (420) in a win over Duke in his first college start. Clemson’s top rusher is sophomore Yusef Kelly, who has 505 yards on the ground and has scored eight touchdowns. Senior Bernard Rambert has started eight games and has 485 yards and six scores.