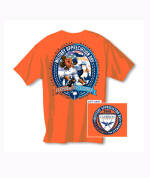 Clemson to Honor the Military on Saturday, September 6, 2008

CLEMSON, SC – On Saturday, September 6, the Clemson University Athletic Department will recognize and honor our fallen soldiers, veterans and current military personnel serving in our armed forces during pre-game and halftime ceremonies of the Clemson vs. The Citadel football game scheduled to kickoff at 3:30 p.m.

Bowman Field will have various military displays on site beginning at 9:00 a.m.:

Pre-game concert and parade – All fans, veterans and current soldiers from both schools are invited to pre-game concert by The Citadel and Clemson bands at 1:30 p.m. in the amphitheater located in front of Cooper Library. Veterans and current soldiers can participate in a parade to the stadium through the Clemson campus. Line-up is at 2:15 p.m. outside the Holmes and Mc Cabe dormitories located on Fort Hill Street. The parade will begin at 2:30 p.m. and end at Gate 9 of Memorial Stadium.

The presentation of colors on the field will be by the Clemson University’s Company C-4 Pershing Rifles as Tiger Platoon raises the American Flag on the East Endzone flagpole during the National Anthem.

Four F-16’s from the South Carolina Air National Guard will fly-over Memorial Stadium at the conclusion of the National Anthem.

The South Carolina National Guard designed the coin that will be used in the pre-game coin toss. The commemorative coin has 62 stars in honor of the 62 soldiers killed from the State of South Carolina in the war in Afghanistan and Iraq.

Halftime festivities – All veterans and current soldiers from both schools are invited to participate in halftime ceremonies by going to the field level in the West Endzone with 5 minutes remaining in the second quarter by using the steps in Sections W & X. Military personnel sitting in the upper deck must get their hand stamp prior to exiting the upper deck so they can proceed to the lower level for the ceremony. They should re-enter the stadium at either Gate 9 or 13 in the West end of Memorial Stadium.

Halftime ceremonies will feature; the parade of veterans and current soldiers onto the field, the introduction of families of fallen soldiers from the State of South Carolina, the placement of a wreath, helmet and boots to signify the fallen soldier, a 21 gun salute by the Clemson University Company-C-4 Pershing Rifles, the playing of “Taps” and Armed Forces Service medley by The Citadel and Clemson bands.

The t-shirt design (see photo on right) is available in both The Citadel and Clemson colors. The 62 stars represent those soldiers from the State of South Carolina who made the ultimate sacrifice in Afghanistan and Iraq.

Helmets – The logo on the front of the orange Military Appreciation Day t-shirts will also be placed on the back of the Clemson helmets for the Citadel game.

“Scroll Of Honor” Posters – 5,000 – 11″x11″ “Scroll of Honor” posters will be distributed to the Clemson dormitory rooms the week of The Citadel game. The posters list the 472 Clemson men who have made the ultimate sacrifice during all wars and in Peacetime operations. The lone Star on the front of the poster is in honor of these Clemson heroes.

The Gold Star was substituted and superimposed upon the blue Star in such a manner as to entirely cover it. The idea of the Gold Star was that the honor and glory accorded the person for his supreme sacrifice in offering for his country, the last full measure of devotion and pride of the family in this sacrifice, rather than the sense of personal loss which would be represented by the mourning symbols.

Tickets: Tickets for The Citadel – Clemson football game can be purchased on-line at ClemsonTigers.com, by phone at 1-800-CLEMSON or in person at the Clemson Athletic Ticket Office from 8:00 a.m. to 4:30 p.m. Monday through Friday.