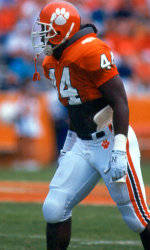 Clemson, SC – Over 75 former Clemson football players will compete in the First Alumni Flag Football game on Saturday, April 14 at Clemson Memorial Stadium. The 48-minute (running time) game will be played immediately after the Clemson Spring Football game and will feature former Tigers who played as far back as the 1970s.

Charlie Bussey, Clemson’s first academic All-American in football and quarterback of Clemson’s 1956 Orange Bowl team, will be the head coach of one of the teams while former Clemson offensive line coach Larry Van Der Heyden will be the head coach of the other team. The teams will be drafted the day before the game with each team composed of an equal amount of players from each decade. Players similar in age will compete on the field at the same time.

Current NFL players Dexter McCleon and Rod Gardner will also be on hand to serve as assistant coaches.

Admission to the game is free of charge.