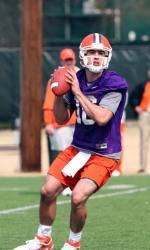 Clemson, SC – It will be the Orange vs. the Purple in Clemson’s annual Spring Football Game at Clemson Memorial Stadium on Saturday afternoon. Kickoff is slated for 1:00 PM on Frank Howard Field and the game will be televised live by CSS television. The network will then replay the game throughout the spring and summer.

Last year, Head Coach Tommy Bowden divided his team evenly and the result was a 24-14 victory for the White team. Cullen Harper led the White team to victory in that game, hitting 15-25 passes for 156 yards.

Harper will have an opportunity to gain a second consecutive Spring Game victory as he leads the Orange roster into Saturday’s game. He has looked solid in two stadium scrimmages, completing 27-42 passes for 310 yards and a touchdown. Joining Harper on the Orange offense will be All-ACC running back James Davis, All-ACC tackle Barry Richardson and veteran wide receiver Aaron Kelly. Leading the Orange defense will be defensive end Phillip Merling, defensive tackle Dorell Scott and strong safety Chris Clemons.

The game will be played in four quarters. The clock will run in normal fashion for the first half, but the second half could be shortened and played with a running clock for different periods of time. There will be kickoffs and punts, but there won’t be any returns, nor coverage. Only a two-step rush will be allowed on field goal and extra point attempts.

The Spring Game will be followed by the first Clemson Alumni Flag football game. Over 70 former Clemson football players will take part in the event at Frank Howard Field.

Admission for the spring game and the Alumni game is free of charge. The gates will open at noon.