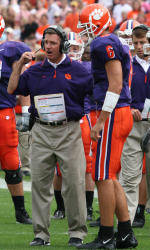 Clemson (7-4) will meet Colorado (7-5) in the Champs Sports Bowl in Orlando, FL on December 27 at 5:00 PM. The game will be broadcast on ESPN. Clemson Athletic Director Dr. Terry Don Phillips and head coach Tommy Bowden accepted the bid on Sunday.

“We are very pleased to be invited to the Champs Sports Bowl,” said Clemson head coach Tommy Bowden. “Our players have been looking forward to returning to a bowl game and what better city than Orlando. We were in this bowl in 2002 and it is a first class bowl in every respect.

“This will be an outstanding matchup, and our players look forward to the challenge of meeting another Big 12 Conference team. We obviously had a great game with Texas A&M in the season opener and we expect to have a very competitive game when we meet Colorado in the Champs Sports Bowl on December 27. Gary Barnett is an excellent coach who had his team in the Big 12 Conference Championship game.” Earlier this year the Tigers defeated Big 12 Conference team Texas A&M at Clemson 25-24 on a 42-yard field goal by Jad Dean with just two seconds remaining.

Clemson and Colorado have two common opponents in Miami (FL) and Texas A&M. Clemson lost to Miami (FL) in triple overtime 36-30 at Clemson on September 17, then Colorado lost to the Hurricanes in Miami the following weekend, 23-3. Both teams defeated Texas A&M, Clemson by the aforementioned 25-24 score in the season opener, and Colorado downed the Aggies 41-20 on October 8.

This bowl game will be a battle of two of the most experienced quarterbacks in the country. Clemson’s Charlie Whitehurst has led the Tigers to 24 victories in his four years as the starter, tied for second in Clemson history. He was Clemson’s quarterback in the Champs Sports Bowl in 2002 when the Tigers lost to Texas Tech.

Joel Klatt, the starting quarterback for Colorado is a veteran of 39 games with the Buffalos. Both are ranked in the top 15 among active Division I quarterbacks in career passing yards and completions. Both are the national co-leaders among active Division I quarterbacks in fourth quarter come from behind victories. Both have led their respective schools to eight fourth-quarter comeback victories in their respective careers.

The contest will also showcase two of the top kickers in the nation. Colorado’s Mason Crosby and Clemson’s Jad Dean are both finalist for the Lou Groza Award, which will be announced Thursday in Orlando. Dean ranks second in the nation in field goals per game with 22 in 11 contests, while Crosby is sixth with 21 made field goals in 12 games.

Both teams have some solid numbers on defense. Colorado ranks ninth in the nation in rushing defense, allowing just 95.3 yards per game. Clemson is 13th in the nation in scoring defense, allowing just 18.3 points per game, and 25th in pass efficiency defense. The Tigers did not allow an offensive touchdown by Florida State and South Carolina in the last two games of the regular season, the first time a defense has held Bobby Bowden and Steve Spurrier coached offense out of the end zone in the same season.

Clemson has a 14-13 all-time record in bowl games, while Colorado is 12-14. This will be the second meeting between Clemson and Colorado on the gridiron, the second time in a bowl game. The Buffaloes defeated the Tigers 27-21 in the 1957 Orange Bowl in Miami, FL. Clemson overcame a 20-0 deficit at halftime to take a 21-20 lead in the fourth quarter before Colorado scored a one-yard rushing touchdown by John Bayuk with 7:13 remaining to give the then Big Seven school the victory.

Charlie Bussey, currently the director of Clemson’s letterman association, was the quarterback for the Tigers in that game. Joel Wells led Clemson that day with 125 yards rushing in 18 attempts and he scored two of Clemson’s three touchdowns.