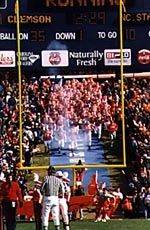 Clemson will continue increased security measures, enforced last year after the Sept. 11 terrorist attacks, for its 2002 football season. The “no pass-outs” rule, enacted for games following the attacks on the World Trade Center and The Pentagon, have become standard operating procedure at Clemson and most ACC schools.

“This was a major change in a long-standing tradition, but for the most part, Clemson fans reacted positively to the University?s concerns,” said University President James F. Barker. “We hope everyone will understand why this level of security is necessary.” The rules also mean no backpacks, tote bags or other large carryalls will be allowed in the football stadium.

Items allowed into the stadium, but subject to search are purses, diaper bags, seat cushions, binoculars, cameras, video cameras, cell phones, radios, Walkman-type radio/recorders and hand-held TVs. Umbrellas and strollers can be checked at the gates by security personnel. Bomb-squad experts and bomb-sniffing dogs from the City of Anderson will be on hand to check the stadium and cars parked near it, and only cars bearing IPTAY placards will be allowed access to roads in the vicinity of the stadium.

Adults attending the game should have an official form of photo identification with them, and children should remain with an adult at all times during the game. Planes will be restricted from flying over the stadium during the game and two hours before and after the game. For Clemson’s first home game on Sept. 7, against Louisiana Tech, this eight-hour window will extend from 11 a.m. until 7 p.m.