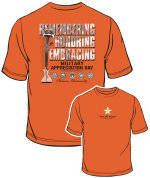 CLEMSON, SC – Clemson Athletics will celebrate Military Appreciation Day this Saturday, September 10 at the Clemson vs. Wofford football game at Memorial Stadium. On Saturday, the Clemson University Athletic Department will recognize and honor our fallen soldiers, veterans and current military personnel serving in our armed forces during pregame and halftime ceremonies of the 3:30 PM football game between the Tigers and Terriers.

Below is a schedule of the day’s events:

Bowman Field will have various military displays on site beginning at 9:00 AM

Pregame Concert and Parade All fans, veterans and current soldiers from both schools are invited to a pregame concert in the amphitheater located in front of Cooper Library. Performing will be:

Veterans and current soldiers can participate in a parade to the stadium through the Clemson campus. Parade lineup is at 2:15 PM (75 minutes prior to kickoff) outside the Holmes and McCabe dormitories located on Fort Hill Street. The parade will begin at 2:30 PM (one hour prior to kickoff) and will end at the tunnel of Littlejohn Coliseum.

Pregame FestivitiesTIME ON THE PRE-GAME CLOCK22:00  Clemson Band Military Pregame Salute  Dotting the “i” – Cadet Commanders from the Army and Air Force ROTC and the Marines Officers Training Program  Presentation of colors by the USMC Color Guard from Paris Island, SC  God Bless America  Introduction of 20 families of fallen soldiers from South Carolina  Invocation – South Carolina National Guard Chaplain Lt. Col. Eric Turner  Pledge of Allegiance  National Anthem  Flyover of four F-16’s from the 169th Fighter Wing of the South Carolina Air National Guard at the conclusion of the National Anthem  The placement of a wreath, helmet and boots by the Clemson University Ranger Club  21 gun salute by the Clemson University Company-C-4 Pershing Rifles and the playing of “Taps” by the Clemson University Tiger Band3:00  Run Down “The Hill”  Coin Toss by members of the S.C. Army National Guard

The South Carolina National Guard has designed the coin that will be used in the pregame coin toss. The commemorative coin honors all the soldiers killed in the war in Afghanistan and Iraq.

Second Quarter Introduction Area first responders will be introduced in memory of those who lost their lives on September 11, 2001. Special guest will be retired New York City Firefighter Dennis Amodio who was assigned to Rescue Company 1 (Special Operations). Dennis helped with the rescue operations at the 1993 World Trade Center bombing and on 9/11.

Halftime Festivities All veterans and current soldiers from both schools are invited to participate in halftime ceremonies by gathering in the West Endzone with five (5) minutes remaining in the second quarter by using Portal W and X.

Halftime ceremonies will feature the parade of veterans and current soldiers on the field. The Citadel’s Summerall Guard will perform a seven-minute silent drill march to honor the men of Clemson Agricultural College who performed in the Senior Platoon from 1930-1960. Following the Summerall Guard’s performance, Clemson University Tiger Band will play the military hymns of the five service branches.

Pershing Rifles The Clemson University Company C-4 Pershing Rifles National Championship drill team will be guarding the Scroll of Honor Memorial beginning at 3:30 PM on Friday, September 9, twenty-four (24) hours prior to kickoff of the Clemson vs. Wofford football game. The changing of the guard will take place at the top of every hour and will be similar to the changing of the guard at the Tomb of the Unknown Soldier at Arlington National Cemetery. At 12 noon on Saturday September 10, there will be a Retreat Ceremony of our National colors at the Scroll of Honor Memorial followed by the posting of a new American flag.

Commemorative T-Shirt on Sale Clemson fans have the opportunity to take part by purchasing this year’s Military Appreciation Day t-shirt. A portion of the proceeds from the sale of the shirt will go towards the Army and Air Force ROTC programs at Clemson University. Cost is $15.95 per shirt.

To Purchase the T-Shirt in Clemson and Greenville, SC:

Scroll of Honor Posters 7,000 – 11″x11″ Scroll of Honor posters will be distributed to the Clemson University dormitory rooms prior to the Wofford football game. The posters list the 479 Clemson men who have made the ultimate sacrifice during all wars. The lone Star on the front of the poster is in honor of these Clemson heroes.

9/11 Salute 2,977 American flags will be planted on Bowman Field the morning of Saturday, September 10, as a memorial to all those who died on September 11, 2001. The flags will be set up through the afternoon of Sunday, 9/11.

Tickets Tickets for the Clemson vs. Wofford football game can be purchased online at www.clemsontigers.com, by phone at 1-800-CLEMSON or in person at the Clemson Athletic Ticket Office from 8:00 AM to 4:30 PM Monday through Friday.