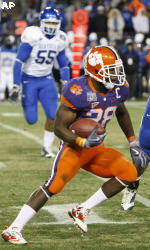 NASHVILLE, Tenn. (AP) C.J. Spiller scored a touchdown and had 172 all-purpose yards in his final college game, leading Clemson to a 21-13 victory over Kentucky on Sunday night in the Music City Bowl.

Kentucky (7-6) was trying to make program history by winning a fourth straight bowl game. The Wildcats certainly had the home-field advantage with blue filling nearly two-thirds of the lower bowl at LP Field.

After the game, Kentucky coach Rich Brooks said he told the team he’s probably not returning next season. The 68-year-old Brooks said he’s “80 percent” sure he’s not coming back. Last January, Kentucky announced that offensive coordinator Joker Phillips will take over as head coach when Brooks steps down.

Spiller, the Atlantic Coast Conference player of the year, scored his 51st career touchdown – a Clemson record – on an 8-yard run with 10:14 left in the fourth quarter to make it 21-13.

Spiller scored three plays after Clemson linebacker Kavell Conner stripped Gene McCaskill after a short catch and Jarvis Jenkins recovered the ball at the Kentucky 19 for the game’s only turnover.

Punter Ryan Tydlacka ran for 9 yards on fourth-and-3, then Brooks used his last timeout with 5:38 left before going for it again on fourth-and-8 at the Clemson 32. The Cats couldn’t convert. Freshman quarterback Morgan Newton scrambled only to be tackled by Ricky Sapp a yard short.

Spiller helped the Tigers run out the clock and start the celebration. He finished with 68 yards on 15 carries and 57 yards on three catches to earn game MVP honors.

But the Wildcats did a decent job of slowing down one of the country’s most dynamic players. He became the first ACC player to rush for at least 1,000 yards and have at least 500 yards receiving in the same history at the end of the third quarter when he took a shovel pass 3 yards.

He didn’t return a kick longer than 30 yards. Kentucky kicker Lones Seiber perfectly placed one kickoff into the right edge of the end zone near the pylon for a touchback, and Spiller caught another near the same spot for another touchback.

Kentucky held onto the ball for more than 34 minutes and ran 22 more plays. Clemson still outgained the Wildcats 321-277 and the Tigers held on to the ball for the final 5:27.

Winds gusting to 22 mph affected both teams on a cold night.

Richard Jackson’s 44-yard field goal for Clemson into the wind came up just short with 4:32 left in the third. Kentucky called a timeout with 2 seconds left in the third, and Dawson Zimmerman’s punt went just 24 yards before bouncing back for the Wildcats.

The Tigers forced Kentucky three-and-out, and Tydlacka had to deal with that wind himself. His punt went only 14 yards.

Clemson led 14-10 at halftime as Kyle Parker found Jacoby Ford all alone in the end zone for a 32-yard TD pass to cap a four-play, 90-yard drive Spiller jumpstarted with a 42-yard catch-and-run.

Seiber put Kentucky up 10-7 in the second with a 39-yard field goal, then Spiller had a 30-yard kickoff return. Tailback Jamie Harper handled all the work on a five-play drive as he picked up 60 yards and capped it with a 1-yard plunge to put the Tigers ahead 14-10 in the second quarter.

The Wildcats’ only TD came on their opening drive when Newton found Chris Matthews in the end zone for a 17-yard TD pass and a 7-0 lead.