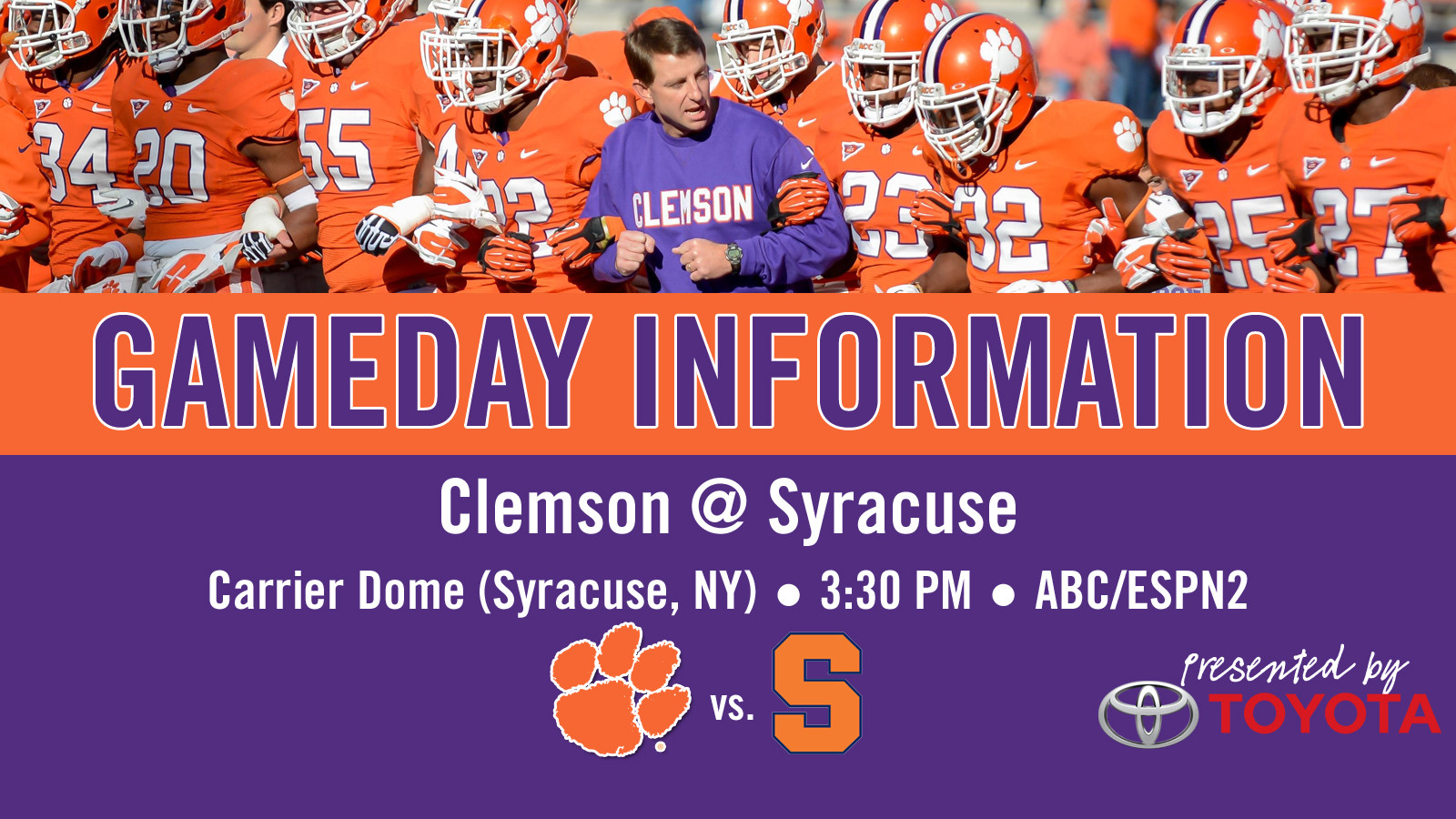 This will be the second of three shows held at the Courtyard by Marriott Village Green, as the show on October 26 (Clemson @ Maryland) will also be held at this venue.

Clemson Makes First Visit to Carrier Dome…for Football Clemson will make its first appearance for a football game in the Carrier Dome this weekend. But, it will not be the first appearance for a Clemson athletic team in the domed facility that opened in 1980. The Clemson men’s basketball team played a game in the Carrier Dome on December4, 1990, but it was not against Syracuse. As part of the ACC-Big East Challenge, Clemson played Seton Hall in the first game of a doubleheader that night and Seton Hall came away with a 78-62 victory. A Clemson athlete has gained a significant victory in the facility, however. Tina Krebs, perhaps Clemson’s great women’s track athlete in history, won the 1500 meters at the 1985 NCAA Indoor Track and Field Championships with a meet record time at the Carrier Dome. It was one of two Indoor NCAA titles for Krebs in her career.

Syracuse vs. Clemson SeriesSyracuse has a 1-0 lead in the football series against Clemson. The only previous meeting took place in the 1996 Gator Bowl (at end of the 1995 season) and Syracuse came away with a convincing 41-0 win in Jacksonville. It is the worst loss in Clemson history in a bowl game in terms of scoring margin and the largest victory margin in a bowl game in Syracuse history.

Clemson had a five-game winning streak entering the game and Syracuse was coming off a loss. But the Orange dominated the action behind a freshman quarterback named Donovan McNabb and a future Pro Bowl receiver named Marvin Harrison.

McNabb completed 13-23 passes for 309 yards and three touchdowns. He also scored at touchdown on the ground. He completed seven passes to Harrison for 173 yards and two scores during the game that was played in a pouring rain storm.

The Syracuse defense was also outstanding and held Clemson to 90 yards rushing on 34 carries. Clemson entered the game fourth in the nation in rushing and was led by Clemson all-time rushing leader Raymond Priester. Priester was held to 36 yards on 15 carries.

It proved to be the final game of Brian Dawkins career at Clemson. The native of Jacksonville, FL had 10 tackles in his last game as a Tiger.

He and McNabb became teammates with the Philadelphia Eagles in 1999.