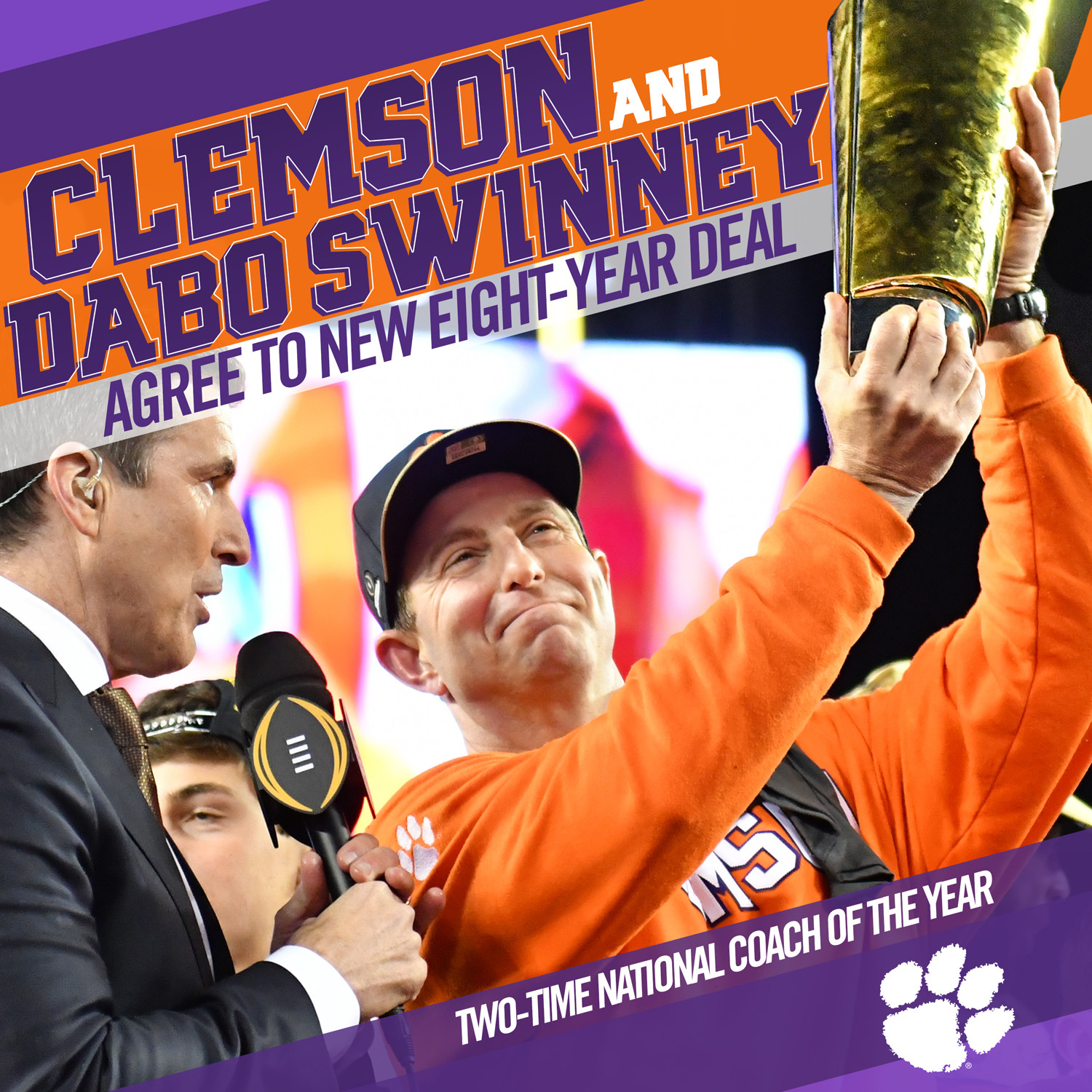 Clemson, S.C. – Clemson University and Head Football Coach Dabo Swinney have agreed to a new eight-year contract through 2024, the athletic department announced today. The terms of the contract were approved by the Clemson University Board of Trustees Compensation Committee.

“Dabo’s impact on our football program, our university and our community is immeasurable and goes well beyond the on-field successes and national championship,” said Director of Athletics Dan Radakovich. “This new agreement demonstrates our strong commitment to Dabo and our confidence in his leadership now—and in the future—and his long-term commitment to Clemson.  We are thrilled that he and his family will be a part of the Clemson Family for years to come.”

Swinney has compiled an 89-28 record over his first nine seasons (eight full seasons) in Clemson, earning the Bear Bryant National Coach of the Year Award in 2015 and 2016 and the Atlantic Coast Conference Coach of the Year honors in 2009 and 2015. The Tigers have posted a 54-15 record in Atlantic Coast Conference games since Swinney took over, and advanced to postseason bowls every year.  The Tigers captured the 2016 College Football Playoff National Championship after playing in the title game in 2015, and have recorded an impressive 70-13 record over the past six seasons.

During Swinney’s nine seasons, 157 of 162 senior lettermen have earned their degrees, including eight current members of the football team.  His teams have finished among the nation’s Top 10 in the NCAA’s Academic Progress Report five of the past six years, and a school-record 58 football student-athletes posted a grade point average of 3.0 or above during the 2017 spring semester.

“I want to thank President Clements, Dan Radakovich and his team, the Board of Trustees, and the entire Clemson family,” Swinney said. “My family and I have been extremely blessed to be part of such an incredible university and community for the past 14 years. This contract makes a strong statement.  It is a mutual commitment reflective of the program we have built and continue to build at Clemson.   The Clemson family does so much to support our program and I couldn’t be more proud to be your head coach.”