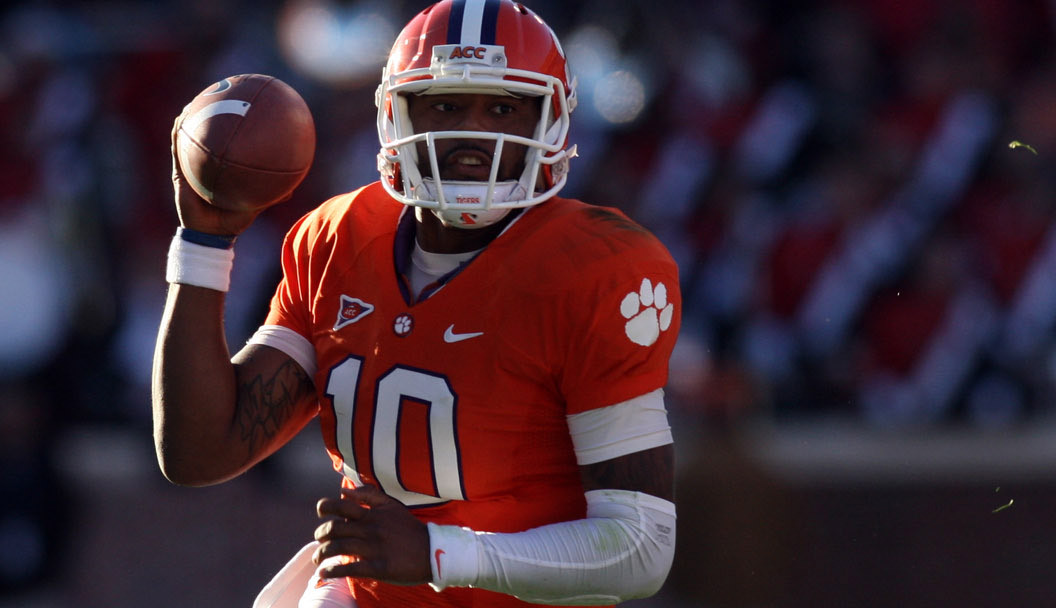 CLEMSON, SC – Even as well as Clemson had been playing, some still wondered how it might respond to a bit of adversity. Facing their largest deficit at home this season, down 24-13 to NC State, the Tigers showed them – by scoring 42 unanswered points.

The eventual 62-48 win over the Wolfpack on Saturday at Memorial Stadium gave No. 9 Clemson its first 10-win regular season since the 1981 national title season, with next week’s regular-season finale at home against South Carolina still to play.

“That’s the first time we’ve faced adversity in awhile,” senior center Dalton Freeman said, “and I think that speaks a lot about this team and the character we have. We’ve been taking care of business pretty early these past few games, and it was good for us to go out there, face some adversity and overcome it.”

The game was the most prolific in Death Valley history from an offensive standpoint, both in terms of yardage and scoring. The Tigers (10-1, 7-1 ACC) and Wolfpack (6-5, 3-4) combined for 1,351 yards of offense and 110 points, both totals that bested marks set in Clemson’s memorable 82-24 win over Wake Forest in 1981.

Tajh Boyd threw for 426 yards and five touchdowns and rushed for 105 yards and three more scores to lead the Tigers, becoming the first player in ACC history to account for eight touchdowns in a single game.

Andre Ellington also went over the century mark with 130 rushing yards on the day, while Sammy Watkins (110) and Brandon Ford (101) did so in terms of receiving.

“The offensive line, I can’t speak about those guys enough,” Boyd said. “We had over 300 yards rushing, 400 yards in the air, no sacks, and it’s just one of those deals where those guys played their tails off and played their hearts out.”

Clemson got on the scoreboard with a field goal on the opening drive of the game, as Chandler Catanzaro converted a 46-yard attempt. After the defense forced a quick three-and-out, Clemson added to its lead on a four-yard run by Boyd to make the score 10-0 with 9:54 still to go in the first quarter.

Clemson’s defense again held State without a first down on its next possession, and Catanzaro added another field goal – this one from 43 yards out – for a 13-0 lead.

But the Wolfpack struck back on the very next play from scrimmage. Mike Glennon hit Tobias Palmer down the sideline for a 77-yard touchdown pass, and State made the score 13-7.

After the Clemson offense went three-and-out, State again scored on the first play of its ensuing possession, as Glennon and Palmer hooked up again, this time on a post pattern, for a 49-yard touchdown and a 14-13 lead. Just 1:12 after the Tigers went up 13-0, they suddenly found themselves trailing.

After another Tiger punt, the Wolfpack extended their lead to 21-13 with an 18-yard touchdown pass from Glennon to Rashard Smith. And after NC State’s Juston Burris intercepted a Boyd pass, Niklas Sade converted a 32-yard field goal to stretch State’s lead to 24-13 just into second-quarter action.

The 11-point deficit at that point was the largest Clemson had faced since its only loss of the season at Florida State on Sept. 23.

The Tigers cut into the deficit on the ensuing drive, as Boyd hit Brandon Ford in the flats for a seven-yard touchdown that made it 24-19 after the Tigers failed to convert a two-point conversion.

The Tigers got the ball back on a fourth-down stop led by Corey Crawford and Grady Jarrett. And four plays later, Boyd hooked up with Watkins for a 27-yard catch-and-run for a score. This time the Tigers converted the two-point try for a 27-24 lead. Less than four minutes after Clemson faced its largest deficit at home all season, it already had the lead back.

The Wolfpack looked poised to regain the lead on the ensuing possession, but after driving 83 yards on 11 plays to the Tiger 9, Rashard Hall picked off Glennon in the end zone to keep Clemson on top.

Five plays later, Boyd found a wide-open DeAndre Hopkins streaking down the NC State sideline for a 62-yard touchdown that gave the Tigers a 34-24 lead with 2:22 to go until the half. Hopkins became Clemson’s all-time leader in career receiving yards on the catch. He finished the game with 2,786 career yards to break Aaron Kelly’s previous mark of 2,711.

“We really don’t panic as an offense because we know we can put up points against anyone,” Hopkins said. “We just knew there were a couple of things we needed to draw up in the dirt and a couple of things they were doing that they hadn’t shown us on film. We just had to come out and play our game and do what we do best.”

On the next play from scrimmage, Malliciah Goodman sacked Glennon and forced a fumble, which was recovered by Crawford to set the Tigers up at the State 32. And four plays later, Boyd sprinted in from nine yards out to give the Tigers a 41-24 lead, which was the halftime margin.

Clemson needed exactly four minutes of the third quarter to find the end zone again, as Boyd hit a wide-open Martavis Bryant down the seam for a 40-yard touchdown that made the score 48-24.

With the touchdown, Boyd broke his own ACC record for touchdown responsibility with his 39th of the season, surpassing the previous mark of 38 he set last year.

Boyd added to that total on the Tigers’ next possession, as he kept the ball on a wide option and took it in from nine yards out. After trailing 24-13 in the second quarter, the Tigers had scored 42 unanswered points at that point to take a 55-24 lead.

“We definitely proved something to ourselves,” Hopkins said. “We knew we had it and we knew we could do this, but the way we did it – being down, coming back and fighting against adversity – it shows a lot about the character of this team and the leaders that we have.”

The Wolfpack finally broke their scoring drought with 3:55 to go in the third quarter when Shadrach Thornton reached the end zone on a 16-yard run. The ‘Pack had not scored since going up 24-13 early in the second quarter before that touchdown made it 55-31.

State wasted little time in scoring again, however, as Earl Wolff intercepted a Boyd pass three plays later and returned it 19 yards to the Clemson 6. On the next play, the Wolfpack scored on their fourth one-play drive of the night when Glennon hit Mario Carter to cut the Tigers’ lead to 55-38.

Clemson needed just three plays to respond. Boyd hit Ford on a crossing route, and the tight end broke into the open field, rumbling 69 yards to tie Dwayne Allen‘s single-season record for a Tiger tight end with his eighth touchdown reception of the season and make the score 62-38.

State struck right back by marching 56 yards on 10 plays and finding the end zone on another Glennon-to-Palmer connection – this one a 29-yarder that made the score 62-45 inside the opening minute of the fourth quarter.

NC State pulled back within two touchdowns at 62-48 on a 40-yard field goal by Sade with 7:35 to go, but that turned out to be the last scoring in a game that had plenty of it.

“We need to turn our focus to the University of South Carolina,” Clemson coach Dabo Swinney said. “We need to make every day in the rest of our season count. I’ve told them the whole season, every week is the biggest game of the year. And we need to finish the season strong.”