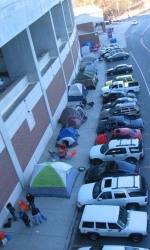 Clemson students began camping outside the Clemson Athletic Ticket Office at Memorial Stadium on Saturday night in anticipation of the student ticket distribution for Konica Minolta Gator Bowl tickets which begins on Monday evening at 5:00 p.m.

Students have the opportunity to purchase two tickets for the bowl game during the distribution from 5:00 to 7:00 p.m. Monday, with any remaining tickets being sold Tuesday, December 9 beginning at 8:00 a.m.

On Wednesday, December 3, Clemson accepted the bid to play in the Konica Minolta Gator Bowl on Thursday, January 1, 2009. On Sunday evening, the Tigers learned that they will face Nebraska in the bowl game, which will be played at 1:00 p.m. at Jacksonville Municipal Stadium in Jacksonville, FL.