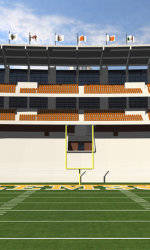 Clemson University construction services opened bids, December 9, 2004, for construction of Phase I of the West End Zone Project. Two bids were received, however both bid amounts exceeded the state-approved construction budget estimate. Within the next three weeks, Clemson will analyze the bids and the underlying cost estimates used for the budget and evaluate options.

The options may include awarding the contract to the apparent low bidder after increasing the project’s funding, declining all bids and soliciting new bids, or separating the construction contract into a site package and a building package.

According to a statement from Director of Athletics Terry Don Phillips, the project will remain on schedule. “Regardless of which option we choose, we have already begun the initial phase of demolition and we will begin site-work early in the year in order to stay on schedule for completion in fall 2006.”