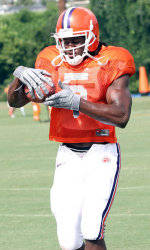 Clemson, SC – Clemson opened spring practice in winter-like conditions on Saturday on the Jervey Athletic Center practice fields. The temperature was in the 40s with a wind chill of 30 degrees.

Bowden welcomes back 17 starters (including punter and place kicker) and 52 lettermen from his 2007 team that finished with a 9-4 record and top 25 national ranking.

Among the returning lettermen are four players who are switching sides of the ball. Rendrick Taylor has moved from wide receiver to linebacker, Jock McKissic has moved from defensive tackle to offensive tackle, Sadat Chambers from running back to safety and Mike Wade from safety to quarterback.

“It was a good first day for the players who have switched positions. There is obviously a learning curve.”

Taylor has played the last three years at wide receiver and has not played on defense since high school when he was a safety. McKissic earned three letters as a defensive tackle before moving to offense for his senior year. He had an 82-yard interception return for a touchdown against South Carolina in 2006. Chambers had a 100-yard rushing game last year against Central Michigan and has already earned a letter on defense and offense in his career. He was a safety as a freshman in 2006. Wade red-shirted the 2006 season as a quarterback but lettered as a safety and holder this past season.

Five players missed or were limited in practice for injury or medical reasons. The list includes Haydrian Lewis, who missed the last eight games last year with a torn ACL injury suffered at Georgia Tech, and reserve kicker John Early, who is also recovering from a torn ACL.

Bowden has six new freshmen on the roster who enrolled in January, but only three practiced on Saturday. Tarik Rollins, a 2008 signee who entered Clemson in January, is also recovering from an injury suffered in high school. Freshman Stanley Hunter also missed Saturday’s practice due to medical reasons. He is expected to start practice after spring break. Freshman quarterback Kyle Parker is also a member of the Clemson baseball team and was with Jack Leggett’s squad at Wake Forest. Parker is expected to be at practice on Monday. Freshmen Da’Quan Bowers and Marquan Jones both practiced for the first time, as did place kicker Spencer Benton.

Bowden also announced that starting linebacker Cortney Vincent would miss the entire spring practice due to a violation of team rules. Vincent had 68 tackles last year to rank sixth on the team. He started 12 of the 13 games and had seven tackles for loss and two sacks.