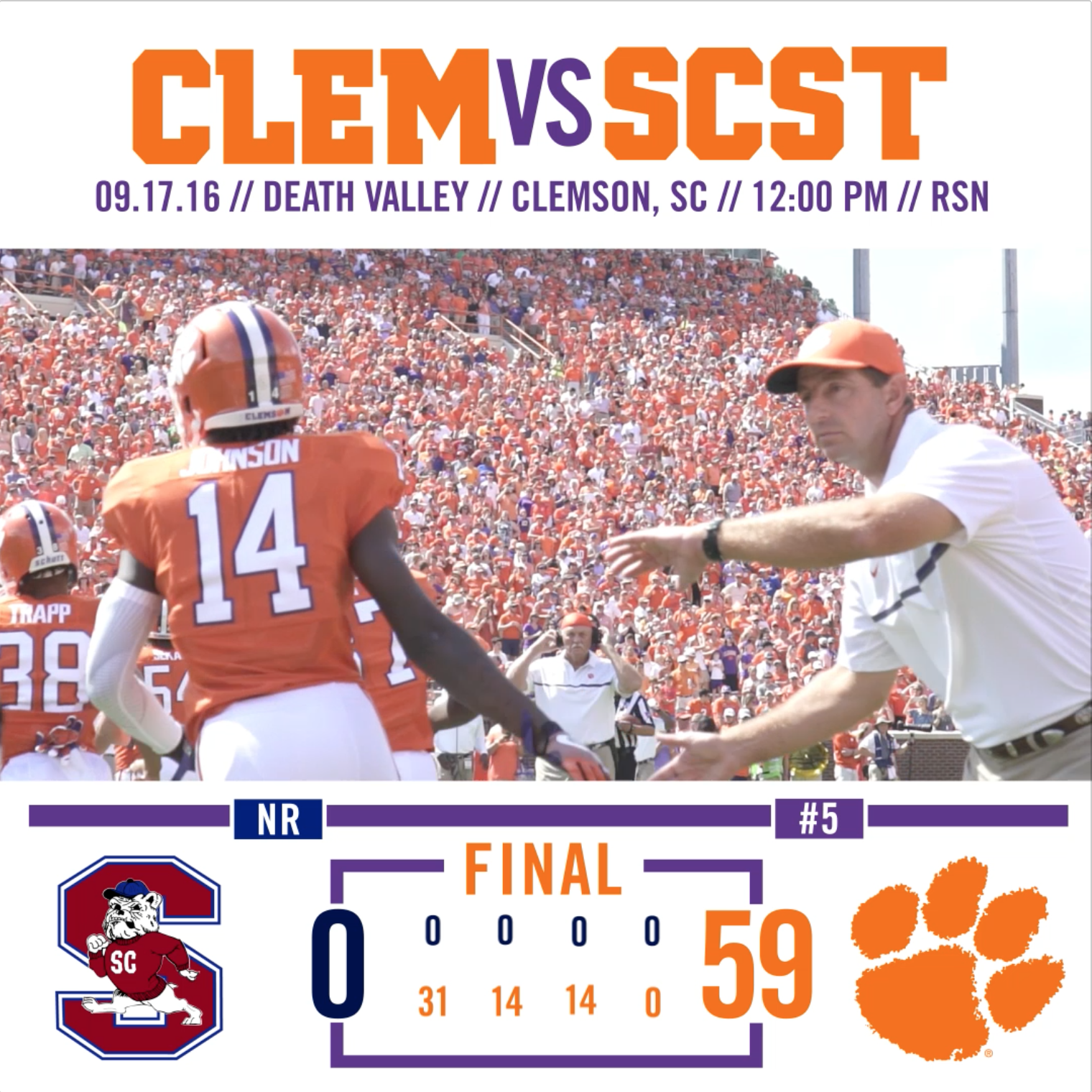 CLEMSON, S.C. – Fueled by a 31-point first quarter, No. 3 Clemson routed SC State 59-0 on Saturday afternoon in Memorial Stadium. That opening frame was the highest scoring first quarter in school history. With the win, the Tigers improved to 3-0 on the year.

“Today was a great day,” said head coach Dabo Swinney. “It’s hard to play 92 guys and still get the shutout…I don’t care who you’re playing. I’m so proud of our guys. They played a clean game for four quarters today. This was great for our team, for our spirit and our morale. It was great to get out there today and go play.”

On the offensive side of the ball, the Tigers were led by Deshaun Watson, who was 12-15 passing for 152 yards and three touchdowns, and Ray-Ray McCloud, who totaled 60 yards and two touchdowns on four receptions. Clemson finished with 555 yards offensively, and 92 Tigers saw playing time.

The Tigers started scoring with 11:33 left in the first quarter on a seven-yard touchdown pass from Watson to McCloud, and they did not look back from there. Later in the quarter, the Bulldogs fumbled a Tiger kickoff in the endzone and Denzel Johnson pounced on the ball for his first career touchdown, upping the lead to 21-0 with 5:20 remaining in the first quarter.

Nick Schuessler then added to the scoring with his first career touchdown pass, a 45-yard connection with freshman Diondre Overton. A 26-yard field goal from Greg Huegel rounded out the first quarter, giving the Tigers a 31-0 lead.

Second-quarter action picked up with a second touchdown pass from Watson to McCloud, marking McCloud’s first career game with multiple scores. One more touchdown from Watson to Deon Cain later, and the Tiger took a 45-0 lead into halftime. Clemson’s 45 first-half points were the most scored in a first half since the Tigers’ matchup with Ball State in 2012, when Clemson also scored 45 points.

With the third and fourth quarters shortened to 12 minutes each, the Tigers kept rolling. Bringing the Clemson point total over 50 was Tavien Feaster, who scored his first career touchdown midway through the third quarter. Trevion Thompson also hauled in his first career touchdown in the third quarter on a seven-yard strike from Kelly Bryant. With Bryant’s scoring pass, Saturday’s game marked the first time three Tiger quarterbacks threw a touchdown pass in a game since Clemson’s win over Presbyterian College in 2010.

The Tigers travel to Atlanta, Ga., for a Thursday night matchup with the Georgia Tech Yellow Jackets at 7:30 p.m. The game will be televised nationally by ESPN.