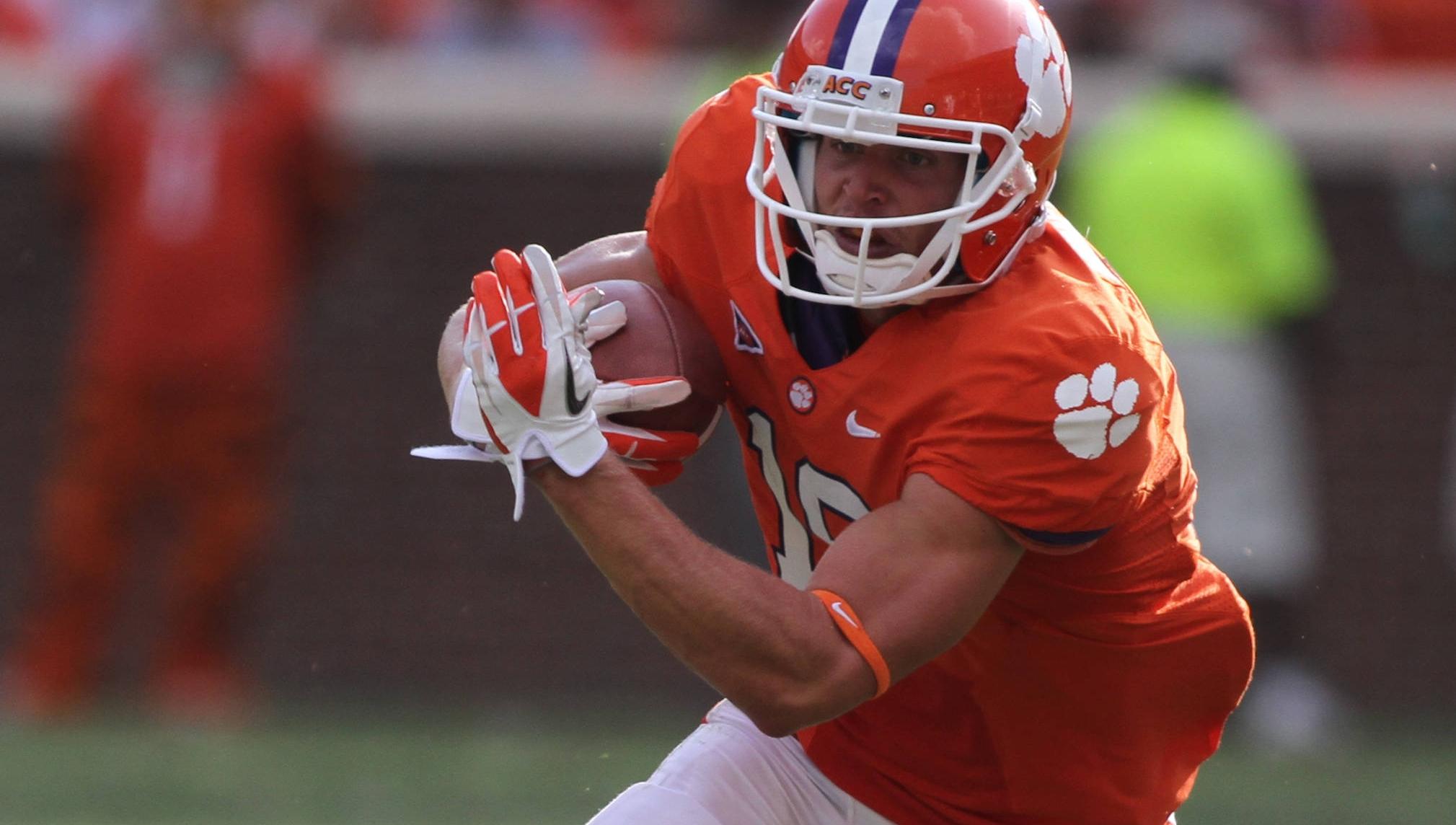 The Tigers scored the game’s first two touchdowns just 12 seconds apart and rolled up 35 points before halftime for the third straight game – both school records – on the way to a 45-10 win on Homecoming.

“There is no doubt we came ready to play,” Clemson head coach Dabo Swinney said. “We were ready from the opening snap.”

With the victory, Clemson set a school record with its 12th straight win at Memorial Stadium going back to the 2011 opener against Troy. It also tied a Clemson record for consecutive home wins regardless of venue, as it won 12 in a row from 1927-30 at Riggs Field as well.

On their fifth starting quarterback this season and also without their leading rusher, receiver and tackler, the Terrapins (4-6, 2-4 ACC) were no match for a Clemson team that won its sixth straight game in ACC play by a margin of at least 14 points.

The No. 10 Tigers (9-1, 6-1) opened the scoring on their second offensive possession with a diving 13-yard grab in the end zone by Adam Humphries for his first career touchdown reception and a 7-0 lead.

“It was just a little crossing route, and thankfully Tajh (Boyd) put it out in a hole for me,” Humphries said. “I was hidden behind a backer and didn’t really see the ball until the last second. So I was thankful that I was in the right place.”

Clemson added to its lead on the next play from scrimmage. Maryland quarterback Shawn Petty had the ball slip from his hands as he looked to throw, and defensive end Corey Crawford scooped up the fumble and returned it 16 yards down the sideline for a touchdown and a 14-0 lead with 7:07 left in the first quarter.

“Those don’t come every day,” Crawford said of his first career score. “The feeling is just indescribable. I’m just so happy right now.”

The two Tiger touchdowns came just 12 seconds apart, the shortest interval between scores in Clemson history. The previous record was 14 seconds, which was the time span between a pair of Derrick Hamilton touchdowns against Duke in 2003.

After Malliciah Goodman forced and recovered a Terp fumble with a sack later in the quarter, Boyd hooked up with DeAndre Hopkins for a 28-yard score seven plays and 53 yards later to extend the lead to 21-0. The touchdown was Hopkins’ ACC-leading 14th of the season, which extended his own school record.

Clemson stretched the lead to 28-0 on its next possession, as Boyd hit Brandon Ford for a 22-yard touchdown down the sideline to cap a seven-play, 60-yard drive that left 13:56 on the second-quarter clock.

Maryland then broke onto the scoreboard after recovering a muffed punt that would have ended its ensuing possession. Two plays later, Petty found Devonte Campbell wide open on a wheel route for a 17-yard touchdown that made the score 28-7 and ended a streak of nine straight times Clemson’s defense had prevented a score following a Tiger turnover.

Andre Ellington added another touchdown for the Tigers on their next possession, rumbling in from six yards to make the score 35-7 after he had bulled over a tackler en route to a 13-yard gain on the previous play that gave Clemson a first-and-goal.

The score marked the third straight game the Tigers had scored at least 35 points in the first half, the first time in program history that has happened.

“We wanted to come out strong early,” center Dalton Freeman said. “Traditionally, Clemson football hasn’t been very consistent, and we’re just trying to put all that to bed. We were glad to be able to come out and jump on them early like we did.”

Chandler Catanzaro made the score 38-7 with a 22-yard field goal on Clemson’s first possession of the second half after Martavis Bryant‘s 48-yard grab along the sideline set the Tigers up deep in Terp territory.

Maryland got those three points back with a field goal of its own, a 39-yard kick by Brad Craddock that was set up by a 74-yard return of a missed attempt by the Tigers on the other end. Craddock made the score 38-10 with 3:24 left in the third quarter.

Clemson built its lead to 45-10 early in the fourth quarter, as Cole Stoudt directed a 16-play, 76-yard drive that took 6:38 off the clock and culminated in a five-yard strike to Stanton Seckinger in the end zone. The touchdown catch was the first of Seckinger’s career.

Clemson now has a 9-1 record after 10 games for the second straight season, and it will have a chance to reach 10 wins in the regular season for the first time since the 1981 season when it hosts North Carolina State – one of the teams that prevented that from happening last season – on Saturday.

“I’ve told my players that now is the time when top-10 teams separate themselves from the pack,” Swinney said. “The end of November is when it matters. We need to play our best football down the stretch.”