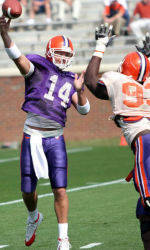 Clemson, SC – Will Proctor completed 16-20 passes for 185 yards and two touchdowns to highlight the play of the offense in a two-hour Clemson football scrimmage at Death Valley on Saturday morning. It was the second major scrimmage of the preseason for Tommy Bowden’s Tigers, who are preparing for the season opener against Florida Atlantic on September 2.

Backup quarterback Cullen Harper was 14-21 for 82 yards and Tribble Reese was 8-10 for 58 yards. The three quarterbacks were a collective 38-51 for 325 yards and two touchdowns.

Sixteen different receivers caught the ball during the scrimmage that was played in perfect weather conditions. Jacoby Ford had the most receptions with six for 32 yards. Nelson Faerber had five catches for 32 and reserve Philip Ashe had four for 32. It was a good day for the tight ends. Freshman Michael Palmer, had three catches for 26 as he continues to play well. First-team tight end Thomas Hunter had 2-33 and Barry had 1-38 and the touchdown. Fullback Alex Pearson had 3-25 in terms of receiving.

Demerick Chancellor led the running backs with 6-87 rushing, including a 55-yard touchdown run against the second-team defense. Paul Macko had 7-34, James Davis 7-27, C.J. Spiller 5-23 and Reggie Merriweather 3-4. Spiller had two receptions for 25.

Nick Watkins was the top tackler with six stops, including a tackle for loss near the goal line. Walker, C.J. Gaddis, Anthony Waters and Ricky Sapp had four tackles apiece. Sapp had two tackles for loss, including a sack.

“It was a good day or work, but the penalties were a disappointment,” said Bowden. “We have a long way to go because of the penalties. There were too many offsides and some fumbles.” The offense committed nine penalties and the defense was charged with six.

Still, Bowden did see some positives. “Before the scrimmage in special teams work I thought C.J. Spiller and Jacoby Ford worked well in the return game. I thought Michael Palmer had another good day at tight end and Chancellor ran well again. He showed some speed on a long touchdown run. Michael Hamlin and Roy Walker both had interceptions early in the scrimmage that were big plays we like to see from the defense. Jacoby Ford did a good job in getting some yards after the catch. We had a high percentage of completions today, but we should in our offense.”

The Tigers will take Sunday off and will be back on the practice fields twice on Monday, the last two-a-day of the preseason.