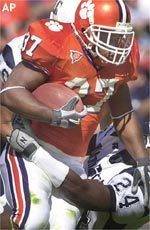 CLEMSON, S.C. (AP) – Reggie Merriweather had two of Clemson’s four rushing touchdowns and the Tigers snapped a four-game losing streak with a 35-6 victory over Utah State on Saturday.

The Tigers (2-4) came into the season ranked in the top 25, yet have fallen near the bottom of the Atlantic Coast Conference during their month-long slide. The team hoped a return home – it hadn’t played at Death Valley since Sept. 11 – and a struggling opponent in Utah State (2-5) might be just the thing to revive its fading bowl hopes.

That was certainly the case.

Tiger defenders had 11 sacks, the most in a game in coach Tommy Bowden’s six seasons, and held Utah State to minus-20 yards rushing.

Clemson’s offense had its problems early on as quarterback Charlie Whitehurst threw two interceptions in the opening half. But the Tigers stuck to the ground after halftime, finishing with the four rushing touchdowns after having only three in their five previous games.

Whitehurst had a run of 26 yards, the longest of his career, and Merriweather ran for 14 during Clemson’s first drive of the second half. Merriweather closed things with a 4-yard scoring run.

The next time Clemson got the ball, Whitehurst hit Airese Currie with a 39-yard pass. Whitehurst ended the series when he rolled right for a 1-yard TD that put the Tigers up 21-0.

Even Clemson’s special teams chipped in. Defensive end Gaines Adams blocked Leon Jackson III’s punt from the end zone in the final quarter and Bobby Williamson covered it up for a Clemson TD.

The only drama at the end was if the Tigers could record their first shutout since 2000. Jackson, Utah State’s third quarterback, led the Aggies to the Clemson 1 with four seconds to go. Jackson rolled left on the final play and got caught up in a large pile. The Aggies raised their arms, but the officials took a few moments before awarding Jackson’s 2-yard TD. There was no extra-point try.