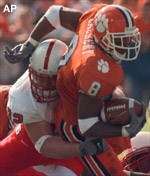 CLEMSON, S.C. – Clemson’s not all Woody Dantzler. The Tigers showed that Saturday.

Dantzler has been No. 5 Clemson’s dazzling breakout star this season, but it took receiver Rod Gardner, tailback Travis Zachery and the defense to finally put away North Carolina State in a 34-27 victory.

“This was good for us,” said Dantzler, who rushed for two touchdowns and threw for another as Clemson continued its best start in 13 years. “We hadn’t had to play a fourth-quarter all year. Now we know how to do that.”

Dantzler’s day was nearly upstaged by North Carolina State’s Philip Rivers, the 18-year-old quarterback who has led three come-from-behind victories and came close to another at Death Valley.

But with Gardner catching 10 passes for 137 yards including several key receptions, Zachery rushing for 147 yards and two touchdowns and Clemson’s defense choking off Rivers’ late rally, the Tigers (6-0, 4-0 Atlantic Coast Conference) held on.

“You should have seen how excited they were in the locker room,” Clemson offensive coordinator Rich Rodriguez said. “I was getting all upset with our mistakes and they were acting like something good happened. I guess it did because they saw they could win when they didn’t play their best.”

Although, it didn’t start out that way.

Dantzler scored on two 1-yard runs and threw a 24-yard pass to Zachery that opened a 20-7 lead with 21 minutes gone. But then the Tigers’ offense – which was averaging 48 points a game coming in – sputtered enough to give the Wolfpack hope.

That’s when Rivers got going. He threw for 370 yards, including three long touchdowns that had Clemson sweating out a game for the first time this season. His last scoring pass was a 63-yarder to Koren Robinson with 12:07 to go brought North Carolina State (4-1, 1-1) to 34-27.

Rivers took North Carolina State to Clemson’s 18 with 3:28 left. But on fourth-and-3, Rivers fade pass to Willie Wright at the end zone’s front right corner was broken up by safety Charles Hafley.

“We didn’t have our `A’ game today,” Clemson guard Will Merritt said. “But it took everyone for us to get this victory. We came up with the important plays when we needed them.”

The Tigers had one anxious moment in its final drive and Dantzler saved them. On third-and-4, Dantzler spun right for 8 yards and the clinching first down with 2:11 remaining.

Clemson is off to best start since the 1987 team opened 6-0. The last time the Tigers won seven straight – they meet 2-3 Maryland here next week – was their national championship season of 1981.

There were shades of national titles at Death Valley. The Sears Trophy given to college football’s champion was on the sidelines. Representatives from the Sugar Bowl, one of the Bowl Championship Series’ games, were on hand to watch.

It wasn’t the picture-perfect performance on national TV that Dantzler would have liked to increase his Heisman profile. He threw two interceptions and his fumble led to Ken Passinghham’s field goal as the Wolfpack began their comeback from a 20-7 first-half deficit.

“Woody did not have his usual good day and had a couple of picks in there,” Clemson coach Tommy Bowden said. But “if you want to win, a lot of good teams will have to go through something like this.”

And it was all almost washed away by Rivers.

He opened the Wolfpack’s first drive with an 81-yard TD pass to Ray Robinson. He threw a 52-yard scoring pass to Bryan Peterson to bring the Wolfpack to 27-20. His final touchdown pass forced Clemson into a fourth-quarter battle for the first time.

“I don’t think it’s devastating,” Rivers said of North Carolina State’s first loss. “It’s not like our season’s over and we’re going to play basketball. We’ll see how we come back from this.”