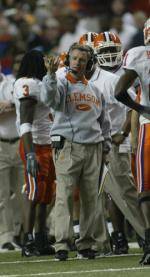 Clemson Ranked In Final Top 25 By Both Polls

Clemson finished the 2003 college football season ranked 22nd in both the AP and USA Today/ESPN Coach’s Polls released early Monday morning. It is the second time Clemson has finished in the final top 25 of both polls under Head Coach Tommy Bowden. Clemson finished 14th in USA Today and 16th by Associated Press in 2000, Bowden’s second season with the program.

Clemson’s 4-0 finish to the season included a pair of wins over teams ranked in the top 10 in the nation at the time of the game. It is the longest winning streak to close a season since 1990 when Clemson won its last five games, including a 30-0 victory over Illinois in the Hall of Fame Bowl.

Clemson started its streak with a 26-10 victory over a third-ranked Florida State team on November 8, and finished it with a 27-14 win over sixth-ranked Tennessee in the Chick-fil-A Peach Bowl on January 2. It marked the first time Clemson had defeated two top-six ranked teams in a four-game period. The win over the Seminoles is the highest ranked victory in Clemson history.

The 2003 season marked the first time since 1981 that Clemson has defeated more than one top 10 team in the same season. The Tigers National Championship team of that season defeated a fourth-ranked Georgia team, an eighth-ranked North Carolina team and a fourth-ranked Nebraska team.

The Tigers were 17th in the final Sagarin computer ranking as published by USA Today. Clemson’s schedule ranking was 23rd according to the same service.

“We felt if we defeated a sixth-ranked University of Tennessee team in the Chick-fil-A Peach Bowl we would deserve to be ranked in the final poll,” said Bowden. ” That was certainly a motivating factor for our players throughout our preparation.

“This top 25 ranking is a testimony to the players and coaches, their hard work and dedication throughout the season. This has been a rewarding season, but we strive to do more.”