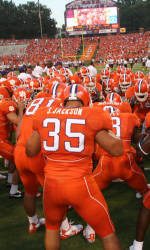 Clemson, SC- Clemson is ranked 18th in the nation in the preseason Associated Press top 25 poll. It is the first time Clemson has been ranked in the AP preseason poll since the 2001 season when Clemson was 19th.

This year’s #18 ranking is the highest preseason ranking for the Clemson program since the preseason of the 2000 season when Clemson was 17th. The Tigers went on to finish 16th in the final AP poll that year after a 9-3 season.

The #18 ranking by AP is the highest for the Clemson program in any AP poll since the October 14, 2001 poll when Clemson was 13th after a 4-1 start. Clemson ranked 21st in the final AP poll last year.

Ohio State is first in the preseason AP poll, followed by Notre Dame. Clemson is fourth among ACC teams in the Associated Press Poll. Florida State is ranked 11th, Miami (FL) is 12th and Virginia Tech is 17th. The Tigers must face Florida State on the road on September 16 and will play at Virginia Tech on October 26. Clemson will not face Miami (FL) in the regular season this year.

“I would rather be ranked in the preseason than not be ranked, but our goal is to be ranked at the end of the season,” said Bowden. “That would give us consecutive top 25 seasons and that is something we haven’t done yet. It is one of our goals for 2006.”