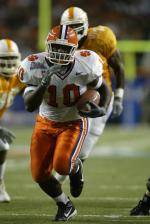 Clemson’s football team is ranked 16th in the nation according to the latest USA Today Sagarin rankings. The rankings, which include the bowl games of Saturday, were released on USA Today’s website on Saturday evening. The final rankings will be done after the Sugar Bowl game between Oklahoma and LSU on Monday morning.

Clemson’s number-16 ranking is its highest in the Sagarin computer rankings since the 2000 season when Clemson was ranked 15th. Clemson was 45th in 2002, an example of the improvement the Tiger program made in 2003.

With just one bowl game left, it is apparent that Clemson will finish in the top 25 of the Sagarin Computer poll for the third time in five years under Tommy Bowden. Clemson was 24th in 1999 and 15th in 2000.

Clemson’s overall schedule is ranked 26th in the nation. Clemson’s highest ever schedule ranking in the final Sagarin ratings is seventh in 1999.