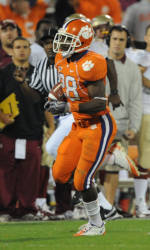 Clemson Pulls Away From Florida State, 40-24

CLEMSON, S.C. (AP)–C.J. Spiller had a career-high 165 yards rushing and his 20th touchdown of at least 50 yards and Clemson took its biggest step yet toward an Atlantic Coast Conference title with a 40-24 victory over Florida State on Saturday night.

Spiller, the Tigers’ star senior, caught a 58-yard TD pass from Kyle Parker and, with 312 all-purpose yards, surpassed the school record of 310 he set in Clemson’s 40-37 overtime win at Miami two weeks ago.

He also closed Clemson’s fifth victory over the Seminoles (4-5, 2-4) in the past seven meetings with a high-stepping, 5-yard scoring run as the orange-clad fans shook Death Valley.

Spiller and the Tigers (6-3, 4-2) are now in control of the ACC’s Atlantic Division with games against North Carolina State and Virginia left.

Florida State coach Bobby Bowden, who turns 80 on Sunday, and his team is in danger of missing out on a bowl bid. Those who have wondered if it was time for Bowden to step aside will likely start to grumble again, too.

A two-game winning streak muted the critics and put FSU back in the Atlantic Division race. Those hopes are gone now after the first Clemson-Florida State game that did not match Bowden against his son, Tommy, in years.

Fans rushed Frank Howard Field with a sense Clemson was closing in on a championship goal.

The Seminoles had hoped to get a rousing effort from a defense that had struggled all year after longtime coodinator Mickey Andrews announced he was leaving after the season.

Instead, Spiller ran through the Seminoles for a record performance. He’d earlier become the school’s all-time pass catcher among running backs and he and track partner, receiver Jacoby Ford, broke an NCAA mark for all-purpose yardage by teammates, bettering the 10,253 yards of Marshall Faulk and Darnay Scott of San Diego State from 1991-93.

With Florida State’s revived offense behind ACC passing leader Ponder and Clemson averaging almost 42 points a game the past three weeks, this one figured to be a shootout–and the team’s didn’t disappoint.

Then the Seminoles defense got into the act, Jamie Robinson returning a Kyle Parker interception 52 yards to go up 17-6.

The fireworks slowed down in the second, largely thanks to mistake from both offenses.

Ponder threw a pair of picks, one after driving to Clemson’s 21, after entering with just three all year.

Clemson tightened the game, taking advantage of Chris Thompson’s fumble in his own territory. Two plays later, Parker found a streaking Xavier Dye across the middle of the field who finished off a 43-yard touchdown.

Spiller converted the first 2-point conversion of his career to cut the Seminoles lead to 17-14.

Spiller’s 45-yard run late in the second half looked like it might bring Clemson more points. However, the Tigers came up empty after a first-and-goal from the 1. Parker was sacked by Marcus White and coughed up the ball the Seminoles.